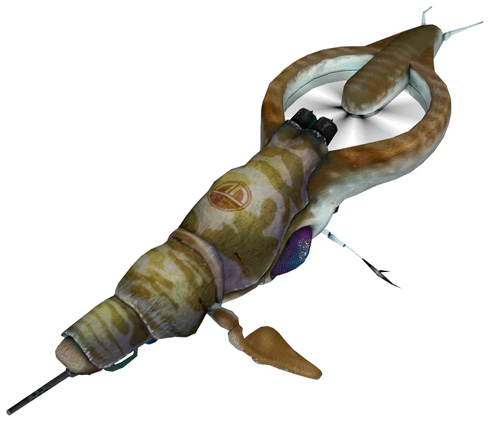 There's a good reason that helicopter looks like a whale.
"They've got technology, sweetheart. They just build it in different ways."
— Han Solo, New Jedi Order

If a society in Science Fiction isn't either following Technology Levels or magic, then you can rest assured that they're making use of organic technology.

Cars, planes, phones, computers, buildings, space ships, weapons (including artillery and war vehicles) and everything else required for a proper Sci-Fi story will be provided in the form of something that is warm, moist, skooshy and drips goo everywhere. Often, this will go so far as to include a convenient thought-based interface. Manipulation of organic matter may be part of the technology as a whole, or even what enabled the tech in the first place. Advanced nanotechnology will often be depicted in a similar fashion.

This type of tech is a common feature of sea-dwelling sapients. Not only are cities entirely made out of cool-looking coral, it's a technological evolutionary path that does not start with the step "set something on fire" or "throw wheels on it." Nor would excessive humidity cause important stuff to short out.

Often crosses over with LEGO Genetics and is depicted as a Sculpted Physique. See Living Ship for one specific example. Compare Bio-Augmentation, which could be Organic Technology applied to the human body in new and fun ways. Contrast Mechanical Lifeforms, which are organisms that happen to be mechanical in nature. Often creates the Womb Level in games. A Hive Caste System is based on using naturally evolved biology rather than technology made from biology. Applied to agriculture, the end result of this trope is often a Multipurpose Monocultured Crop.

This is becoming an actual thing.

Interestingly, Real Life synthetic biology seems to be going the reverse direction of this trope: making biology look more like chemistry and nanotechnology, rather than making technology more like biology. Whether we'll get our meaty jetpacks remains to be seen.