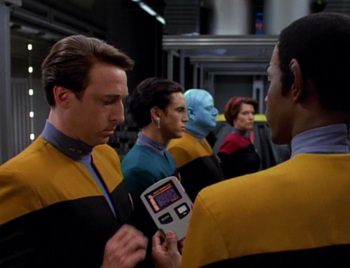 You call this a PADD, maggot?! It's barely a Game Boy!
Get the cheese to Sickbay.
Advertisement:

Lt. Tuvok is tasked with the job of putting some former Maquis crew members through rigorous Starfleet training while Voyager is dealing with the problem of random ship malfunctions.