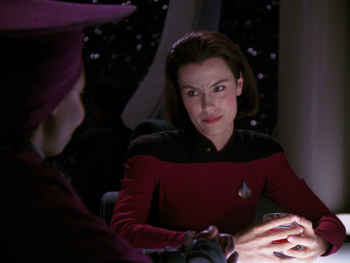 Picard is getting his hair trimmed by Mr. Mot, a Bolian Chatty Hairdresser who prattles about how best to deal with the Romulans. To Picard's relief, he's soon called to the bridge after they've received a distress call from a Federation outpost. It seems they were attacked, and a Bajoran terrorist group is claiming responsibility.

The Enterprise arrives at the starbase for some exposition: forty years ago, the Cardassian Empire annexed the home system of the Bajorans, and have subjected them to a brutal occupation. Now, the Bajorans are rebelling to drive the Cardassians away. In all that time, though, they've never attacked the Federation, which remained neutral due to its doctrine of noninterference. The new Cardassian treaty gives the Federation the ability to act on behalf of the Bajoran people, however, and this attack gives them reason to begin doing so quickly. Admiral Kennelly tells Picard to find the Bajoran resistance leader who attacked them. To aid in the end, he's assigned a new crewman to the Enterprise: Ensign Ro Laren, a court-martialed Bajoran officer recently plucked out of prison. Picard is upset at this transfer without his consent, but Admiral Kennelly is insistent. With no choice but to follow orders, Picard agrees.

Ensign Ro is beamed aboard, and Riker immediately orders her to remove her Bajoran earring. There's more hostility to come from the rest of the crew. However, Ro does have insight into the Bajoran refugee situation. She directs them to Keeve, a man who has more influence over the displaced Baorans than their original contact. Picard tries to negotiate for Keeve's help, but the man has no love for the Federation due to its history of apathy toward Bajoran suffering. Ro barks at the man to listen to what Picard has to say, and the captain offers supplies to the refugees, which goes a long way toward establishing trust.

In Ten Forward, Ro drinks by herself, refusing all offers of conversation, and the other officers gossip about her. Guinan takes an interest in the new ensign and tries to get her to open up. In spite of Ro's attempts to be stand-offish, she finds herself talking about how she refused a direct order during an away mission, resulting in her court-martial and imprisonment. Guinan leaves proclaiming that she's made a friend. Ro then gets a message from Admiral Kennelly and informs him that "everything is going according to plan."

The crew soon find the location of the resistance cell, but Ro beams down well before the other officers without permission. Picard leads an away team that immediately gets ambushed by the terrorist leader Orta and his men, with Ro in tow. Orta claims that he was not behind the attack on the Federation. After being let go, Troi notes that Orta was telling the truth.

Picard has Ro confined to quarters as he tries to figure out what is going on. Guinan convinces Ro to come clean with what she knows and for Picard to listen to her. She admits that Admiral Kennelly arranged for her release on the condition that she would negotiate with the Bajoran terrorists to return to their camps in exchange for weapons and ships in their fight against the Cardassians. She also opens up, revealing how she watched her father get tortured to death and it made her ashamed to be Bajoran. Since the Bajorans aren't behind the attack, she didn't go through with the admiral's plan.

To determine the truth, Picard arranges for a transport ship filled with the resistance fighters to travel close to the Cardassian border. Sure enough, a Galor-class warship arrives, and Admiral Kennely orders Picard to leave the area. As Picard expected, the Cardassians destroy the transport. However, no one was on board: it was controlled from the ground, and Kennelly has just been exposed for manipulating events to start a war, a colossal breach of the Prime Directive. With the current matter resolved, Picard offers Ro to stay aboard as a member of his crew. Ro accepts as long as she is allowed to wear her Bajoran earring, which Picard immediately approves.

Ensign Ro Laren explains to Captain Picard and Commander Riker after they mistakenly address her as "Ensign Laren" that Bajorans traditionally put their family name ahead of their given name.

Ensign Ro Laren explains to Captain Picard and Commander Riker after they mistakenly address her as "Ensign Laren" that Bajorans traditionally put their family name ahead of their given name.