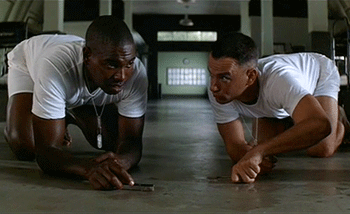 "Make it shine now, kids! I had to cut costs on provisions, so you'll all be reusing those toothbrushes later!"
— Cameron Campbell, Camp Camp
Advertisement:

A typical Punishment Detail in the military, or otherwise strict organization, in media is scrubbing the floor with a toothbrush (possibly the offender's own), however impractical it may be. Sometimes, a person will opt to use someone else's toothbrush, especially someone they're not particularly fond of.

Truth in Television, as a stiff-bristled toothbrush is great for grouting or small stains.

A Sub-Trope of With This Herring. May overlap with The Dreaded Toilet Duty.

In Camp Campbell, the campers have to clean the floor with their own toothbrushes.

In Camp Campbell, the campers have to clean the floor with their own toothbrushes.