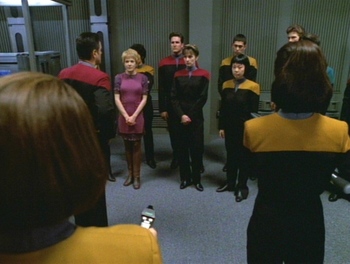 Remember how the Maquis/Starfleet conflict didn't really lead to much? Well, this episode's about that.
Under my command, we won't let almighty Federation principles get in the way of opportunities, the way Janeway did when she destroyed the array that could have gotten us home. And we won't be wasting precious time stopping to investigate every insignificant anomaly that we come across. What we will do is use any means necessary to acquire technology that can shorten our journey. To hell with Starfleet regulations.
Advertisement:

B'elanna Torres discovers a holodeck program on Voyager that turns out to be a simulation of a Maquis rebellion, where Commander Chakotay calls for a mutiny as soon as Captain Janeway and Lt. Tom Paris leave the ship on an away mission. This program soon becomes popular as the crew try it out for themselves, either taking the side of the mutineers or Janeway loyalists trying to retake Voyager from the Maquis. Unfortunately, as Lt. Paris finds out, the program is unfinished, leaving everyone wondering who created it in the first place. Lt. Tuvok finally admits to being the program's creator, designing it as a training simulation in case the members of the Maquis actually attempt a mutiny, but not completing it when he saw how the members of both Voyager and the Maquis were getting along with each other. Lt. Paris decides that he's going to complete the creation of the program when Captain Janeway decides against erasing it, seeing how what was originally intended as a training simulation turned out to be nothing but harmless fun. However, when Lt. Tuvok tries to open the program so that Paris can continue working on it, they find out that another person has worked on the program — Seska, who modified the program so that it would be a death trap scenario for Tuvok should he try to continue his work. When the other members of Voyager realize that the program is now booby-trapped, they do their own tinkering with the program in order to help Tuvok and Paris escape and end the program without destroying the ship.