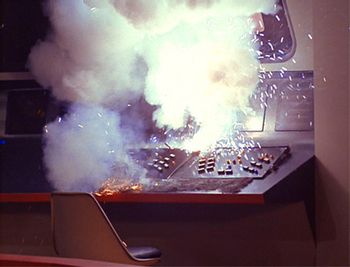 Circuit-breakers are for pansies.
Warning! All control consoles double as Firework Storage Lockers. On detonation of fireworks, please leap dramatically to the floor and feign unconsciousness.
— Instruction Manuals for the

Explosions look cool. As a result, in the future (and sometimes in the present) there are no such things as fuses or circuit breakers, and every control panel, sensor, and shield has C4 built into it. That way, if Readings Are Off the Scale, the user will be sure to notice. Also, no matter how deeply buried inside a ship its bridge is, you are guaranteed a shower of sparks and a deadly explosion when the enemy gets through its shields, or if some other disaster befalls the ship.

Long considered an unrealistic but effective way of showing battle damage when you don't have the budget to mess up a miniature or — in modern works — create damaged versions of CGI models. Realistically the console would be separated from the destructive effects of high power circuits through various means of protection and would not harm its operator under any scenario. Worst case scenario the controls should simply stop working, or the screen should just turn off.

A Super-Trope to Readings Blew Up the Scale.

Compare No Water Proofing In The Future, Holographic Terminal (which doesn't explode — just get spammed with pop ups). Should require No OSHA Compliance, although that point is rarely touched. Squat all to do with musical instruments going kaboom, or the 1812 Overture. Thus, this trope has nothing to do with Orchestral Bombing.