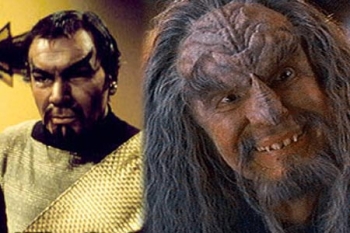 On the left, Commander Kor in "Errand of Mercy." On the right, Commander Kor in "Sword of Kahless," twenty-five years later (105 in-universe).
"And what is with the Klingons?
Remember in the day?
They looked like Puerto Ricans and they dressed in gold lamé
Now they look like heavy metal rockers from the dead
With leather pants and frizzy hair and lobsters on their heads"
— The USS Make Shit Up, Voltaire
Advertisement:

Over the course of time, advances in special effects technology and make-up techniques can allow a series to have bigger and better creatures and monsters. Often, the original version of a creature might not have been that cool or interesting, and so a new model was established using the more advanced technology. In other cases, technological advances can't be credited for the retcon: sometimes a creature's look will change as a series progresses due to Art Evolution.

This is often seen in fantasy or Sci-fi media.