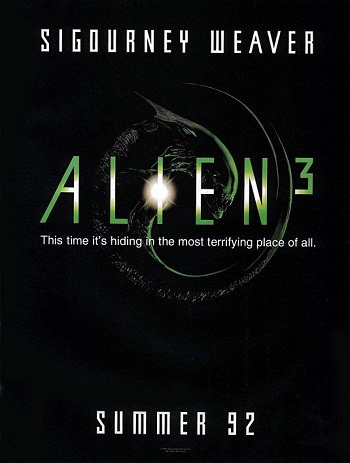 It's in an ox. Or a dog, depending on what version you're watching.note The tagline is likely referring to the fact that Ripley has been infected with an Alien herself.
"You've been in my life so long, I can't remember anything else."
— Ripley, talking to the Alien
Advertisement:

Alien³ (1992) is the third film in the Alien film series. It was the first film directed by David Fincher.

Following on from the events of Aliens, hypersleep goes on the fritz again and Ripley's ship crash lands on a prison planet, killing all occupants except her. Another facehugger slips into the colony and infects a dog (or an Ox, depending on which cut you're watching), which quickly gives birth to a quadrupedal alien. Arf arf.

This film introduced the concept of aliens having different shapes depending on their host bodies.

The project went through several producers, writers, and directors before finally settling on David Fincher's rewrite, with predictable results. Fincher has since disowned the movie due to the Executive Meddling he had to endure during production. However, due to the special edition of the film, the Assembly Cut, which greatly expands upon many scenes and characters, the film has undergone something of a reevaluation.

Ripley: [playback of a recording, interrupted by static] Ash, Captain Dallas are dead. Cargo and ship destroyed. I should reach the frontier in about six weeks. With a little luck, the network will pick me up. This is Ripley, last survivor of the Nostromo, signing off.
[computer screen]
Weyland Yutani
Work Prison Fury 161
Closed And Sealed.
Custodial Presence Terminated.
Remaining Refining Equipment
To Be Sold As Scrap.