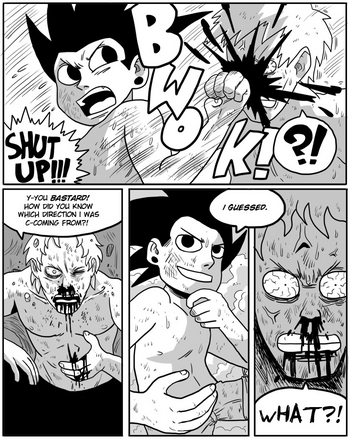 Bart: Dad, you killed the zombie Flanders!
Homer: He was a zombie?
— The Simpsons, "Treehouse Of Horror III", "Dial Z For Zombie"
Advertisement:

Stock Phrase uttered in which our hero attacks a seemingly Innocent Bystander but discovers that the bystander was not what he appeared.

Borders on Indy Ploy for charging in with no other plan and Moral Dissonance when you realized that our hero had no problem killing someone and just happened to land on the accepted side of What Measure Is a Non-Human?. Alternatively, sometimes the hero might have known the truth all along and just be yanking the chain of the person asking the question.

This may also be used in a Spot the Imposter scene, when the hero's choice turns out to be correct.

However, it can also be used to show the hero's courage, as in: "How did you know that bomb wasn't real?" "I didn't." (It's also used as a punchline, where the hero retroactively freaks out when they realize how much danger they were in.)

An interesting spin on this trope is that it was the final straw for Piper and he temporarily quits the team.