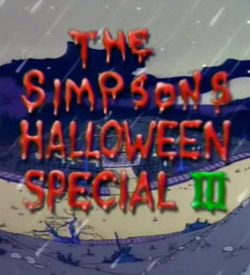 "Treehouse of Horror III" is the fifth episode of the fourth season of The Simpsons. In their third "Halloween Episode", the Simpson family have a party with Bart and Lisa's friends and tell scary stories, including the tale of a possessed Krusty doll that goes after Homer, a Simpsonized parody of the classic 1933 "beauty-meets-beast" monster film King Kong (1933), and Bart causes a Zombie Apocalypse thanks to a strange library book.
Advertisement:

It's Bart's birthday, and Homer (as always) has forgotten to get a gift on time, so he hurries to a bazaar/fro-yo parlor called "House of Evil", where he finds a talking Krusty doll and buys it in spite of the shopkeeper warning him about the doll having an horrible curse. Then Grampa exclaims he sees evil in the doll which later threatens to kill him out of the blue, but Homer brushes off these concerns until the thing almost harpoons him while bathing.

After a number of incidents, Homer puts the Krusty doll inside a bag of dirty socks which he sends to a bottomless pit, but the doll then returns and attacks Homer, trying to drown him in the dog bowl. A frantic Marge calls the consumer hotline and a man is sent to the house, finding out that the problem was that the doll was switched on "Evil". After being switched on "Good", the doll becomes Homer's servant, but it doesn't matter to him as long as he has a Malibu Stacy doll for himself.

Showman Mr. Burns hires a single white female (Marge Bouvier) to come with them on an excursion to Ape Island to find the mythical King Homer. There, the natives notice them because of Marge's protruding hair and she is offered in sacrifice to the ape, who takes a liking to her instead of eating her. However, Burns' crew knocks King Homer out and Burns puts him on Broadway.note If Homer was killed, he would have cooked him into monkey stew for the Army.

King Homer's New York debut goes well until the reporters' flickering flashbulbs enrage the ape, who breaks free from his chains and wreaks havoc around town. He then abducts Marge from the Empire State Building, but is only able to climb a couple of floors before passing out. While Burns declares his career over, Marge decides to marry him.

After presenting a pop-up preschool book of the alphabet for his report, Bart is told to redo it. He goes into the Occult Section of the school library and finds a spell book. When Lisa reminds Bart about the anniversary of the death of Snowball I, he decides to use the book to bring it back to life. Their attempt ultimately fails and eventually return home, but unbeknownst to them, they do revive those resting at the cemetery.

The undead soon attack the townspeople and eventually break into the Simpson home. Homer offers to sacrifice himself, but the zombies don't think he's got enough brains, so they flee. Lisa resolves they go to the school library in hopes of finding a book that will reverse the spell. After Bart casts the counter-spell, the zombies return to their graves and everything returns to normal... until the family find themselves watching TV.

Homer offers himself to the zombies in order to protect his family, only for the zombies to find that his brain is quite lacking.

Example of:
Your Brain Won't Be Much of a Meal

Homer offers himself to the zombies in order to protect his family, only for the zombies to find that his brain is quite lacking.