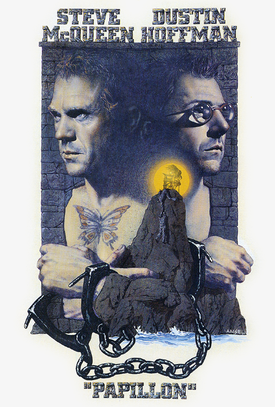 Papillon is a 1973 prison film directed by Franklin J. Schaffner, starring Steve McQueen and Dustin Hoffman. It is an adaptation of the 1969 autobiography of Henri Charrière.

Papillon (McQueen), a man wrongly convicted of murder, is put aboard a vessel to the Bagne de Cayenne, a Penal Colony in French Guyana. During the crossing, he meets Louis Dega, a forger. He offers to protect him, in exchange of money to fund his escape plan. Dega accepts. Once arrived in the penal colony, Papillon and Dega suffer ill treatment and Papillon tries to escape.

The book received another film adaptation in 2017.