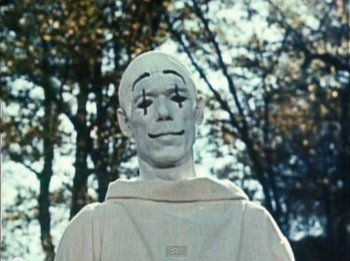 Parable is a 1964 short film (22 minutes) directed by Rolf Forsberg.

It is a Christian film, commissioned by the Council of Churches for the City of New York, and first exhibited at the Protestant Paviliion of the 1964 World's Fair. The film, told without any dialogue, centers around a traveling circus. As the circus is trundling through the countryside, it is followed by a clown dressed all in white, riding on a donkey. The clown does various good deeds for the people of the circus: he carries the water for the man who was fetching water buckets for the elephants, he takes the place of the man in the dunking booth, and he liberates a magician's assistant from her boss's impaled-by-swords routine. These people become his followers.

Finally he enters the big top, where a man named Magnus has a "human marionette" act, a rather terrifying show in which living people are hung from the top of the tent while Magnus controls them as puppets, complete with strings. The clown, seeing this spectacle, makes the ultimate sacrifice.

This film was controversial in some quarters in 1964 for depicting Jesus as a circus clown, but it won a shelf full of awards for short films and was screened in churches for many years after. It was an inspiration for the musical Godspell, which also depicts Jesus as a clown.