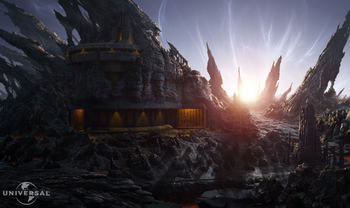 Even if you do escape, where are you going to go?
"You see any barbed wire fences? Any guard towers? No? That's because we don't need 'em. Go ahead, start running away. I won't stop you… You wanna run away, them buzzards'll pick you clean by the end of the third day."
— Mr. Sir, Holes
Advertisement:

This prison doesn't need walls, or guards, or security cameras. No-one's stopping prisoners from escaping. The jailor might even point them in the direction of the convenient escape route. The door's right there! It's not even locked! Why doesn't everyone just leave?

Well, because escape would be suicide. The secure facility remains secure because it is located in an extremely inhospitable environment. It might be in the middle of a vast desert or tundra, such that anyone foolish enough to leave would die of exposure. Alternatively, the surroundings could be populated by Super-Persistent Predators or other deadly creatures. In extreme cases, the prison may be smack in the middle of the ocean, or at the top of a mountain with a hundred-foot drop on all sides. In sci-fi settings it could be in a space ship or station, on an asteroid, or a Death World. Needless to say, it's safer just to stay inside.

Often serves as an example of Morton's Fork. May be how a villain carries out Released to Elsewhere. If there's any chance at all of success, the escape route is likely to be a Death Course; sufficiently badass prisoners may theoretically win their freedom. Being imprisoned in such a facility, however, may lead to the realization that Hope Is Scary. Some prisoners may choose to commit suicide using the escape route, preferring death to imprisonment.

Often overlaps with Penal Colony, which are built in remote (but not necessarily deadly) locations by definition. Mountaintop Healthcare may or may not be consciously designed with confinement in mind, but it certainly has that effect in practice.

Sub-Trope of The Alcatraz. Super-Trope to Sky Cell, and to Fire and Brimstone Hell. Compare Border Patrol, wherein video games make it certain death to attempt to leave the playing area.