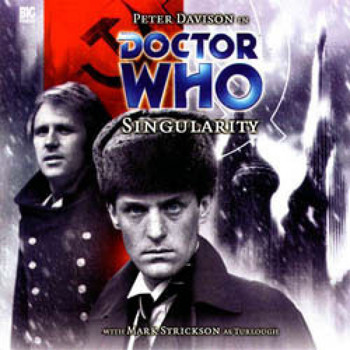 The Fifth Doctor and Turlough unexpectedly land in late 21st century Moscow after picking up on a serious problem with the Web of Time. Turlough tries to stay behind in the TARDIS until they somehow magically land on the planet of sunny beaches and pretty girls, but the Doctor drags him along nonetheless. Upon exiting, they find that a cult known as the Somnus Foundation has gained serious traction in Russia and set up a massive tower in the middle of Moscow - one with architecture native to the 51st century.

Turlough soon meets his Girl of the Week in the form of a young woman named Lena - and then has to rescue her from a Somnus thug. As it happens, her brother Alexi has just joined the cult, and she clearly doesn't trust the "Sleepers" with his safety; Lena and her best friend Pavel — a conspiracy geek — explain that the group promises its members enlightenment and utopian future, but are clearly involved with something unpleasant. After narrowly saving Lena from a psychic assassination attempt via a flock of angry birds, the Doctor decides to investigate further... by simply showing up at the Somnus Tower for a public tour. Unfortunately, Alexi has already been rewarded with a "True Name" and now seems to possess a different personality - one called "Great Seo"; now one of the leaders of the cult, he has no interest in leaving.

Worse still, cult founder Great Qel seems to recognize the Doctor: though she allows him to leave unharmed, she's clearly keeping an eye on him. A Time Lord is exactly what she needs, and she seems to be holding a grudge against this one in particular. Pavel later reveals that Qel used to be a respected scientist by the name of Natalia Pushkin, and the Somnus Foundation was just a research group - up until the day their clinic burned down.

Curious, Team TARDIS, Lena and Pavel head off to ten years before - the day of the fire and the day Natalia renamed herself Qel. Confronted with the idea of time travel, Lena runs off really fast, crying about how she has to get to a hospital to stop her mother from dying - but is eventually talked out of it by Turlough. Meanwhile, Pavel and the Doctor infiltrate the Somnus clinic and find a group of human test subjects linked together via a Hive Mind; with a little technical help, the tormented hive mind explains that the alien being known as Qel has taken over the real Natalia Pushkin's body, and is trying to link the entire human race into a psychic singularity. Thanks to the Doctor's assistance, the experimental hive mind is able to commit suicide, setting fire to the clinic in the process. Unfortunately, the Doctor accidentally cuts himself on a broken window while escaping - allowing Qel to get a blood sample and recognize Time Lord interference in her experiments.

Shortly after Team TARDIS arrive back in the present, Lena has a breakdown over the lack of progress, coming within inches of handing the Doctor and Turlough over to the Sleepers before the Doctor manages to placate her. Eventually, she explains just why she tried to change the past: her mother had been suffering from terminal cancer on the night of the fire, and after witnessing all the suffering she'd been made to endure over the last few months, Lena took action; using the blackout that resulted from the experimental hive mind's suicide as cover, she switched off her mother's life support and "let her sleep." From then on she had to raise her brother on her own, but was so desperate to keep him safe that she ended up smothering him, destroying their relationship and driving Alexi to join the Sleepers.

Unfortunately, while Lena is busy explaining this to the Doctor, Qel is able to track down the TARDIS via the blood sample she took over a decade ago, and sends out a capture team to retrieve it - abducting both the TARDIS and Turlough, killing Pavel in the process. As it turns out, the cult leaders and its "enlightened" members are creatures from the far, far future, who plan to use the bodies of humans as their new host forms in order to escape the Heat Death of the Universe: their regular bodies in the far future are dying and barely kept together with bits of metal and flesh, as Turlough finds out when his body is stolen and he ends up imprisoned on Ember, the last surviving human outpost at the end of time - alongside earlier victims of the Somnus like the real Alexi and the real Natalia.

The next stage of the plan soon becomes apparent when the Somnus are able to extract the power they need by torturing the TARDIS, psychically linking the population of Moscow into another hive mind. After Lena succumbs to Despair Event Horizon and is assimilated into the gestalt, the Doctor is left to confront the cult leaders at the tower alone. There, Qel finally reveals what her race is: the very last humans in the universe.

In the future, the Time Lords saw the end of the universe approaching and gathered up all the races they considered worthwhile, before departing for a new dimension; humanity was left behind to die along with the burned-out stars. The Somnus Foundation's true goal is to transmit their brethren into new bodies into the past and escape the end of the universe; they've chosen a time just before human space colonization begins en mass, so it has the largest concentration of humans - allowing them to link enough minds together into a singularity capable of achieving psychic transubstantiation, a godlike gestalt powerful enough to rewrite history.

Meanwhile, in the future, Turlough is able to rally the transplanted victims enough to lead an attack on the Somnus power source keeping the hive mind stable; in the present, the Doctor uses the confusion that results as a means of playing up the rivalry between Qel and Seo long enough to distract them while he sabotages their machinery. As a result, the singularity breaks down, the Sleepers are evicted from their stolen bodies, and their victims are finally allowed to return home, reuniting Lena and Alexi. However, with the tower exploding around them, Natalia realizes she can't let Qel return to the future or else she'll just start her mind transference experiments all over again; trapping the Somnus founder inside her consciousness, she remains behind to die in the collapsing tower while the Doctor and the others escape.

In the far future, the Doctor visits Seo, the very last human in the entire universe — not to stop humanity from dying out, but simply to be there when it happens and to pay his respects.