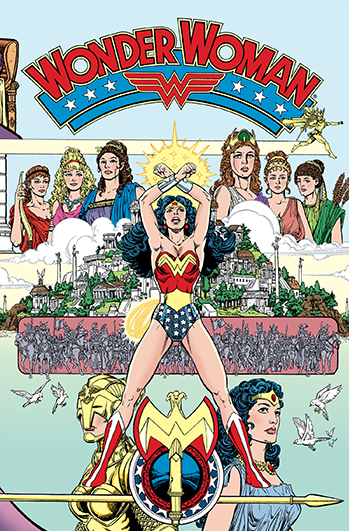 Themyscira's populace, paragon, and patrons. Plus Hera.
So worlds lived, worlds died, and nothing was the same again. Still, the cosmos called for an Olympus, an Amazon race, a champion to lead them all — and Gaea obliged. No longer bound to the meandering, often self-contradicting stories of years past (or the decrepit Comics Code Authority), a new crop of creators arose to craft a definitive Wonder Woman for The '80s and beyond. With this brand-new Wonder Woman came countless new friends, new foes, new locales and new adventures, which came to shape not only her own mythos, but many others in the wider DCU.
Advertisement:

Wonder Woman Volume 2 ran from 1987 to 2006, with over two hundred issues to its name. These covered a lot of story arcs and Crisis Crossovers, but can generally be organized among the following six writers:

Alas, not all was ambrosia and nectar. Since the book didn't have any "sister" titles to coordinate with, new writers were usually free — if not outright ordered — to Retool, Retcon, or outright ignore parts of the previous run as they saw fit. As a result, Wonder Woman's reputation for Depending on the Writer arguably grew worse; it wasn't uncommon to see whole supporting casts (and sometimes whole cities) Put on a Bus so the new guy could make room for his own creations, and to this day different runs tend to be highly divisive among longtime fans.

And yet... and yet, this wasn't always a minus. For one, it meant that writers were a lot less bound by Status Quo Is God than you'd expect for an A-list superhero, which led to some very interesting experiments in Diana's characterization, background, and power-set (how many other members of the Justice League can put "former Olympian God" on their resume?). For another, the different spins that each writer put on her personality arguably made her one of the DC Universe's most human heroes, able to see the good in her vilest foes, call out her closest mentors and allies on their misbehavior — and, in turn, be criticized on her own failures and shortcomings.

Volume 2 eventually tapered off into Infinite Crisis (and the infamous Max Lord neck-snapping), much to the dismay of fans who saw long-running character arcs and building mysteries Cut Short. For better or worse, though, a new chapter in the Amazing Amazon's adventures lay just around the corner...

The first — and, for many, still the best — of Wonder Woman's Post-Crisis architects, George Pereznote Originally working in tandem with Greg Potter, who peaced out about two issues in took considerable efforts to overhaul not just Diana herself, but the entire history of the Amazons. Under his pen, the series became a high-stakes epic fantasy, tying itself closer to Classical Mythology than ever before (though not, of course, without the usual doses of artistic license).

With rogue Gods and monsters hounding her on all sides, you'd expect a rougher, tougher Wonder Woman than any before — and you'd be (mostly) wrong. The Diana of this era was more a Naïve Newcomer than just about every take before or since, reacting to every little curiosity of "Man's World" with wide eyes and open mouth, and every battle with great reluctance. Love was her forte, peace her dream, and instead of marking herself as a superhero (to the point of eschewing a Secret Identity and initially turning down Justice League membership), she prized the role of ambassador, building bridges between man and Amazon wherever she could.

Perez's run makes use of the following tropes:OverallChallenge of the Gods

Beauty and the Beasts

"Journey to the Stars with Wonder Woman"

The ContestThe introduction of Artemis

The Challenge of Artemis

Eyes of the Gorgon

Land of the Dead