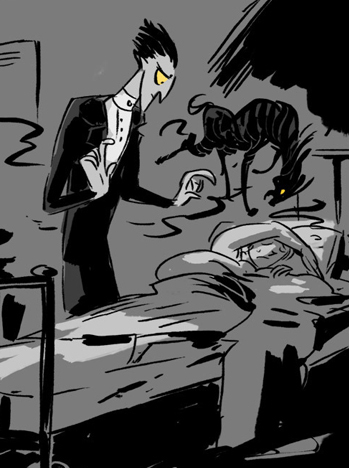 "The Stillborn King now exists only within his own tormented dreams. Still, the echoes of those nightmares seep into creation, infecting others with his demented fantasies. He has been granted no one demense over which to lord, for such concept of physical space and corporeal existence have ceased to have value to him. Instead, his nightmares roil across the Earth like a storm, raining down deranged hallucinations that cross the boundaries between illusion and reality, eroding the value of the walls between sleep and wakefulness, sanity and madness."
— "Hell On Earth", Mage: The Ascension - Ascension
Advertisement:

The moment every man, woman, and child climbs on to their beds, rest their heads on a pillow, and close their eyes before drifting into sleep for the night, something evil begins to stir. When you would normally expect to find yourself riding a unicorn in a colorful land made out of candy and pastries, or relishing in your complete freedom as you soar the cosmos as Superman, you'll instead find yourself in a dark, horrifying parody of a dream that specifically seeks to drag you into a pit of despair. You'll find yourself in a haunted forest stalked by creepy dolls with knives, drowning in a lake of thick, black oil, forced to run naked with legs made of Jello as the teleporting Monster Clown inevitably grabs you and vomits flesh eating maggots all over your face... Or dropping your ice cream on the floor.

As it turns out, there's an entity responsible for those horrible, sleepless nights, in the same way The Sandman is thought to bring good dreams.

Meet the Nightmare Weaver, a Sub-Trope of Dream Weaver who exists for the sole purpose of making people wear brown pants in their beds with his bad dreams, and he most likely enjoys doing it. Chances are, he may know just about every fear or guilt he can use to psychologically torture you, and when he's feeling particularly nosy, he'll walk up to you in your sleep and corrupt whatever happy dream you were having at the moment with a simple touch of the finger. If he's feeling lazy, he can send stab-happy dolls, teleporting maggot-vomiting clowns, teleporting doll clowns that vomit maggots with knives, and a plethora of other foul apparitions to do the dirty work for him. More often than not, he'll be not just any boogeyman, but the Boogeyman, maybe even the very incarnation of nightmares with his own personal Mordor of night terrors, and he's nearly always present in settings revolving around Dreams vs. Nightmares, clashing with the do-gooders trying to keep it all sugary sweet. Expect him to aspire to Take Over the World with his nightmares, and be portrayed as Always Chaotic Evil.

In short, this kind of character is Exactly What It Says on the Tin; a Decomposite Character deriving from The Sandman who embodies the latter's negative aspects in some portrayals. Particularly cruel ones like to pull you into Your Worst Nightmare, as well as alcohol poisoning to those who take a shot every time the word "nightmare" is mentioned in this article.

In Fantasy Kitchen Sink type settings, this entity will usually be portrayed as among the evilest and most dangerous entities out there, despite the fact that nightmares, by their nature as dreams, have almost no capability of causing any real or lasting harm to a person. If they normally inhabit Dream Land, they may find themselves Weaker in the Real World.

In contrast to the benign Storytellers, the Incubi bring on horrific nightmares and plague their victims with self-destructive impulses, spurring them on in pursuit of their baser natures.

In contrast to the benign Storytellers, the Incubi bring on horrific nightmares and plague their victims with self-destructive impulses, spurring them on in pursuit of their baser natures.