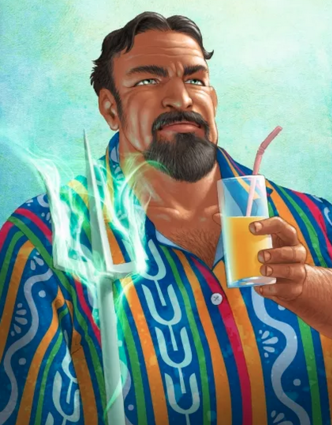 Poseidon now likes to kick it by the beach.
"I thought that since times have changed, I should move my remit to be the god of war, not merely the god of battle. The brave warrior risking his life in combat is passé- nowadays the civilized warmonger prefers the clinical indifference of a ranged drone strike. [...] The point is, I need to rebrand my image. Otherwise I'd just end up being the god of drunken slapfights in pub car parks."
— The Hound explaining why

he switched from Scary Impractical Armor to a general's uniform, Exterminatus Now
Advertisement:

A god or other supernatural entity adapts to the modern world due to some of their aspects or powers no longer being as important to their worshipers' lives as they were in their heyday. May be caused by Gods Need Prayer Badly and result in Odd Job Gods. See also Death of the Old Gods for when they can't keep up. Compare Postmodern Magic.

Hermes, the Greek god of travel and messages, does his work from a UPS store in New York.

Hermes, the Greek god of travel and messages, does his work from a UPS store in New York.