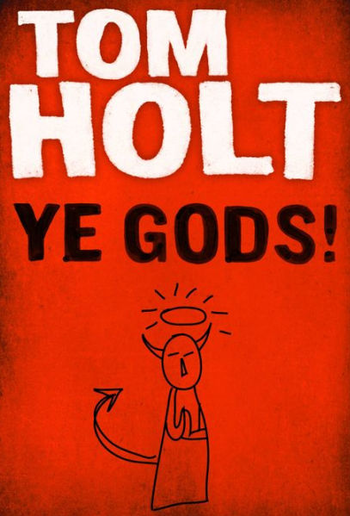 "In the beginning was the Word. Nobody knows what it actually was, although it would be nice to think it was 'Sorry'."
Advertisement:

Ye Gods! is a comic fantasy novel by Tom Holt. Set on the Earth of Next Sunday A.D., where the ancient Greek gods still exist but no longer have much real power, the story is presented by an omniscient and rather Lemony Narrator.

Jason Derry is a classic Hero- by which we mean he is a son of the god Jupiter. This causes him no end of trouble, despite the fact that he is able to dispatch hordes of centaurs and huge monsters with ease. The problems come in when he becomes entangled in a plot by Jupiter to regain dominance over the human race. There is also the fact that Jason's mother keeps trying to set him up with the girl next door...

Most of the tropes listed below are either subverted, parodied, or Played for Laughs.

Some examples of the tropes found in Ye Gods!:

"Why do the little bastards always have to be Tropers?"