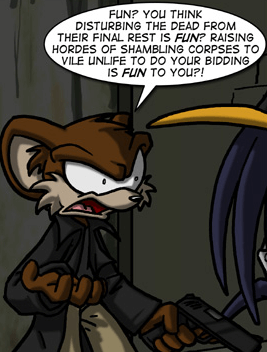 Kid: How'd you get the metal parts, mister? I want some!
Lothar: Oh, you do, do you? Let me tell you a story. I was kidnapped, drugged and tortured as a group of scientists wanted to see what would happen if my genetically modified body was combined with bionics. So I was strapped down and injected with a chemical cocktail that caused horrific pain and permanently bonded me to cold, unfeeling metal. The next thing I know I wake up in a blood rage and slaughtered my way through dozens of armed guards to emerge in the middle of nowhere, alone and half dead. Does that sound like fun?
Kid: Oh, so like the opening of Guyver then? I love that anime!
— Exterminatus Now
Advertisement:

Useful in many functions of drama. For one, it immediately shows the more experienced character to be the older and wiser of the two. It may be used in a Deconstruction to show just how awful a seemingly incredibly cool thing would be in real life. And of course, it can actually be quite funny to see the more experienced character completely terrify the younger one with a horrifically descriptive summary of the activity as the younger one desperately tries to backpedal on their stance.

A common version is for the New Meat imagining that War Is Glorious to be corrected by the Shell-Shocked Veteran that no, War Is Hell.

Of course, frequently it's subverted as the younger character places a rebuttal on exactly why it is still cool. Or, when the "fun" is particularly nasty, having that character think it fun because of all the trouble it brings.