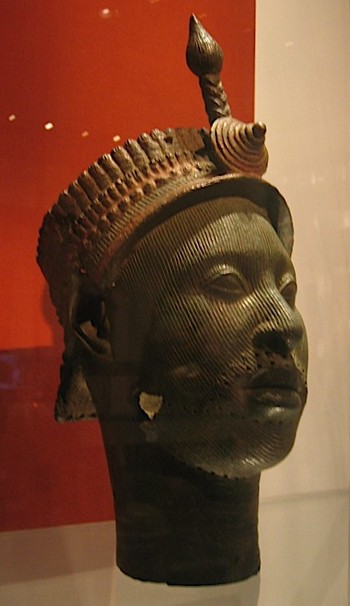 The Yoruba are one of the largest and most notable ethnic groups in Sub-Saharan Africa. Though concentrated in southwestern Nigeria where they make up around 1/4th of the population, they also make up a large historical minority in Benin as well as Togo. Even prior to colonization by the United Kingdom the Yoruba were among the most heavily urbanized ethnic groups in Africa, living in numerous rival city-states going back to the 11th century AD. More spiritually important than any other city was Ife which had been established in the late middle ages. The open grasslands of the Dahomey Gap allowed the Yoruba to become accomplished equestrians unlike their fellows in the rainforest belt of Guinea. The Yoruba states were united in the 17th century under the Oyo empire. With powerful cavalry they were even able to subjugate the fearsome Dahomeans to their west. Over the centuries Oyo declined due to internal conflicts between city-states and military pressure from not only the Fulani jihadists but the newly reinvigorated Dahomey kingdom which threw off the yoke of Yoruba power and became wealthy from the slave trade.

The influence of Yoruba culture has been drastic not only on their immediate neighbors such as the Nupe, Gbe, Edo, Itsekiri, Ijaw, and Igala to name a few but across the Atlantic Ocean as well. Around 1/3rd of the slaves brought to the Americas during the Atlantic slave trade were from what is now Nigeria, of that grouping a huge number were Yoruba. The Yoruba carried with them their gods or "Orishas" along with their language, songs, rituals, and divination method which spread among the other slaves rapidly. Yoruba religion had a significant impact on the Vodun faith before and after leaving Africa, with some scholars considering them part of a single complex of associated beliefs much like Classical Mythology joined the Greek and Roman religions. Edo myth is so closely bound with Yoruba myth that it will be displayed here as well. The lifelike bronze sculptures of the Yoruba and in the Benin kingdom share much similarity which may point to common influence from the ancient Nok Culture of Central Nigeria.

While today over half of Yorubas are Muslims with Christians being a large runner up, around 1 in 10 Yorubas still hold fast to their traditional beliefs. The late arrival of Eurasian religions allowed the traditional beliefs of the Yoruba to be recorded much more extensively than many of their neighbors. In the Americas slaves in the largely Roman Catholic Latin America were free to continue traditional forms of worship provided they masked the Orishas under the guise of saints. New World religions like Candomblé, Quimbanda, Umbanda, Palo, Santeria, Voodoo, and more owe influence to the Yoruba to varying degrees.

Yoruba mythology lent itself well to Roman Catholicism and many immediately saw a reflection of the almighty trinity of Olodumare/Olorun/Olofi above the 401 Orishas who manage the world. Some of the Orishas have always existed and others are mortals who Ascend to a Higher Plane of Existence. Below the status of Orishas but also not part of the human or animal kingdoms were a class of various beings known as "Iwin", "Ajogun", "Egbe" or "Oro".