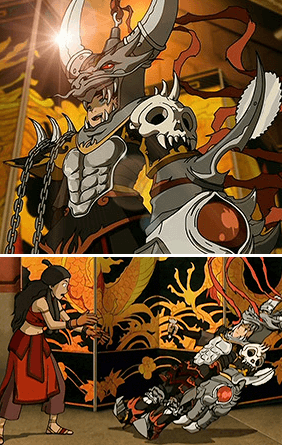 Not even the Avatar can stand up to it... or in it.
Advertisement:

Armor with loads of flashy things that look intimidating, but that may not be nearly as useful as it looks. It has loads of Spikes of Villainy, Shoulders of Doom, and often some skulls. Expect any headgear to to be a Rage Helm, unless the bearer is a main character. It is meant to look intimidating first and foremost, and may be more hindrance than help to the wearer. Usually qualifies as Impossibly Cool Clothes.

If any normal character wore this armor, it might render them so heavy and awkward they could barely fight. However, if a character can wear this mess and still fight despite a Power Limiter, it renders them even more threatening.

Animated Armor made from this kind of suit of course has none of the mobility problems a human would have, probably due to lacking any structure without the armor to begin with. A Wizard Did It indeed. Similarly made more plausible by Powered Armor in sci-fi settings.

Sometimes an Evil Overlord will wear this even when not in battle, which creates a variation of Ermine Cape Effect. Many of these are also Tin Tyrants. Bonus points if said armor comes with a High Collar of Doom.

Compare Weapon for Intimidation. It serves the same purpose and may be wielded by someone who wears this armor.