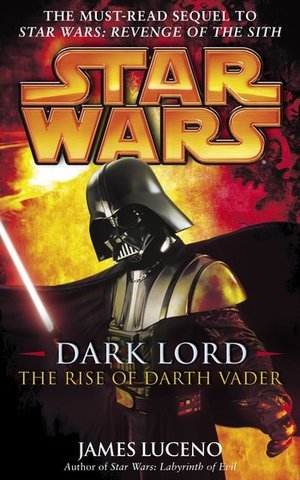 "Two there should be; no more no less. One to embody power, the other to crave it."
— From the writings of Darth Bane
Advertisement:

Star Wars: Dark Lord—The Rise of Darth Vader is a 2005 Star Wars Legends novel by James Luceno. It takes place in the immediate aftermath of the events of Revenge of the Sith—Darth Vader struggles to cope with his Emergency Transformation and identity crisis, while a group of rogue Jedi led by Master Roan Shryne deal with the fallout of Order 66.

The novel begins in the "final hours of the Clone Wars," contemporaneous with the latter half of Revenge of the Sith. Roan Shryne, Bol Chatak, and Chatak's Padawan Olee Starstone lead an incursion onto the Separatist world of Murkhana. Order 66 comes down during the battle, but a squad of independent-minded clone commandos, who have history with Shryne, disobey orders and allow the Jedi to escape.

A Time Skip of one month follows. The newly-Emperor Palpatine learns of the commandos' betrayal and decides to give Darth Vader the task of punishing them, in his public debut as Palpatine's enforcer. Vader discovers Chatak hidden among ordinary prisoners and kills her in a duel; Shryne and Starstone are again able to get away.

The rest of the novel juxtaposes Shryne and Starstone's attempts to meet up with other surviving Jedi and escape from under the Empire's thumb against Vader's obsession with completing their extermination, as a way of burying the lingering voice of Anakin Skywalker within him. Along the way, they cross paths with some rising stars in the newly minted Imperial Navy and the incipient Rebellion.

Dark Lord—The Rise of Darth Vader concludes the unofficial "Dark Lord" trilogy begun by Labyrinth of Evil, also by Luceno, and continued with the Revenge of the Sith novelization by Matt Stover.