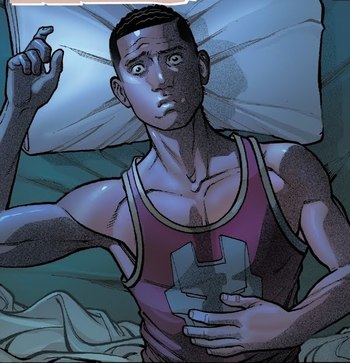 And remember that you have classes first thing in the morning!
"I detest sleep. I've got better things to do. Besides, I find it frightening — to awaken and be unsure of everything you remember about life not being just part of a dream. Waking means I've slept, and sleep dissolves what certainty I have left."
— Johnny C., Johnny the Homicidal Maniac
Advertisement:

A common way to convey that a character is either really strange or has either paranoid or schizophrenic tendencies (or both) is to make them an insomniac. Whether only during times of great stress or as a chronic disorder (obviously a case of Truth in Television) expect these characters to be cranky, moody, mistrusting and sometimes even violent.

Expect Exhausted Eye Bags and other Eye Tropes to occur, as well as other symptoms of Sleep Deprivation.

See also Past Experience Nightmare. Waking up from one may cause a sleepless night; waking up from one many, many, many nights may lead to this in its milder forms, since the character gets some sleep. Characters for whom not sleeping is normal are The Sleepless, though it can overlap with this trope, particularly when they're obsessive. See Insomnia Episode when the character becomes insomniac just temporarily. The Night Owl might be an insomniac, but it's more likely that they just enjoy evenings.

Compare/contrast The Sleepless for characters who cannot sleep or physically don't need any sleep for some reason, often with signs of the supernatural. Also contrast to Sleepy Depressive for characters who are stressed, depressed, or otherwise mentally unsound but have the opposite problem of sleeping too much.

No relation to the video game company of the same name.