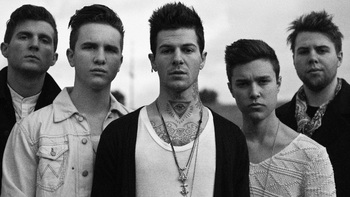 From left to right: Bryan, Mikey, Jesse, Zach, and Jeremy.
Not pictured: Brandon, As he wasn't in the band at this point.
Use the sleeves on my sweater
Let's have an adventure
Head in the clouds but my gravity's centered
— "Sweater Weather"
Advertisement:

The Neighbourhood is an American (yes, American) Alternative Rock group formed in August 2011. They're known for their moody, often dark songs, and their black, white, and gray aesthetics in their music videos and albums.

Tropes related to The Neighbourhood: