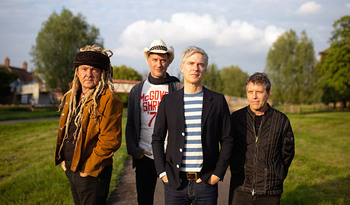 Left to right: Daniel Lorca, Ira Elliot, Matthew Caws and Doug Gillard
"I wanna know what it's like
On the inside of love
I'm standing at the gates
I see the beauty above"
— "Inside of Love"
Advertisement:

Nada Surf is an alternative rock band hailing from New York City. Formed in 1992, it consists of Matthew Caws (lead vocals, guitar), Daniel Lorca (bass, vocals) and Ira Elliot (drums), with Doug Gillard on the guitars being the latest addition since 2010.

The band is well known for their hit single "Popular" from the Ric Ocasek-produced debut High/Low in 1996. Their follow-up The Proximity Effect was set to be released in 1998 (it only did in Europe) but issues with the label prevented the band to do so. They released it eventually in the 2000 under an independent label.

In 2002, the band released their third album Let Go, and despite not reaching the same success of their hit "Popular", it received great acclaim from the critics and gave the band a massive cult following among the indie crowd.

The band released their latest album Never Not Together in 2020.