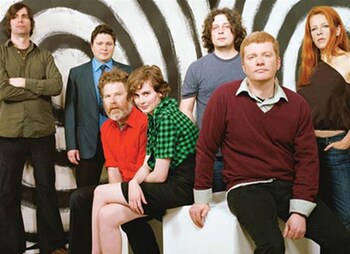 L-R: Todd Fancey, Blaine Thurier, John Collins, Kathryn Calder, Kurt Dahle, Carl Newman, Neko Case.
The New Pornographers are an Indie Rock and/or Power Pop (depending on who you ask) Supergroup with origins in Vancouver, BC. Formed in the late Nineties, they released their first album, Mass Romantic, in 2000.
Advertisement:

Being as they are a supergroup, all of the members had significant careers before the band started, and most still do. However, the band really launched them up into the heights of indie fame.

Most songs are written by Newman (and most of those have him on lead vocals), with Bejar (who almost always sings his own songs) making a few contributions on most albums, and Collins and Case joining in sporadically.