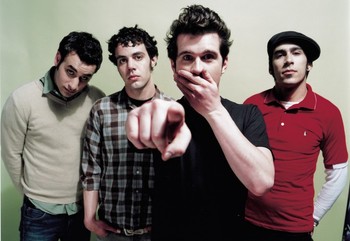 Left to right: Vincent Accardi, Garrett Tierney, Jesse Lacey and Brian Lane
Influenced by:
Do I divide and fall apart?
Cause my bright is too slight to hold back all my dark
And the ship went down in sight of land
And at the gates does Thomas ask to see my hands?
— "Jesus"
Advertisement:

Brand New was a rock band from Long Island, New York formed in 2000. The band is recognized as one of the most popular and influential acts to emerge from the emo scene of the 2000s, distinguished for having a fanbase and legacy that have long outlasted other similar bands. Their sound has also been categorized under genres including alternative/indie rock and post-hardcore, and is often associated with their melancholic, sincere lyrics and vocalist Jesse Lacey's passionate delivery.

Following the pop punk foray of their debut Your Favorite Weapon, the band's next album Deja Entendu marked a distinct stylistic change for the band towards alternative/emo styles of rock; both this album and their next album, The Devil and God Are Raging Inside Me (released after the band moved labels from Triple Crown Records to Interscope Records), are considered the most popular and acclaimed of Brand New's discography.

The band started their own label in 2008, titled Procrastinate! Music Traitors, and released their fourth album Daisy the following year. Eight years of uncertainty about the band's future, staved by single releases or album re-releases, would follow, culminating in the surprise release of their fifth album Science Fiction, which would become the band's first #1-debuting album on the Billboard 200.

While Lacey stated that Brand New would disband in 2018, he was accused in late 2017 of instances of sexual misconduct occurring during the band's early days. Apart from immediate ramifications including their touring guitarist and the supporting act of a then-upcoming European tour pulling out of the show dates, and the cancellation of all upcoming dates, the band has not been publicly active since the allegations broke. While this neither confirms nor denies their disbandment, the band reportedly turned down an opportunity in 2021 to reunite for a 2023 music festival.

The Devil and God are troping inside me: