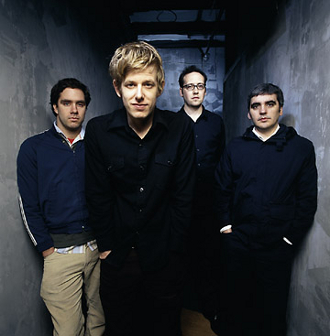 Spoon is a rock band from Austin, Texas formed in 1993. The current lineup includes founders Britt Daniel and Jim Eno, as well as Alex Fischel and Gerardo Larios. The group has a very catchy and distinct sound that blends classic rock/punk influences with the experimentation and techniques commonly associated with modern Alternative Rock. To date, they currently have nine studio albums to their name:
Advertisement:

Outside of Spoon, Britt Daniel has been involved in a number of side projects such as remixing and producing music for other bands like Interpol and White Rabbits, contributing to the original score for Stranger Than Fiction, and most recently, co-founding a new band with members of other established indie acts called Divine Fits. Their well-received debut, A Thing Called Divine Fits was released in 2012.