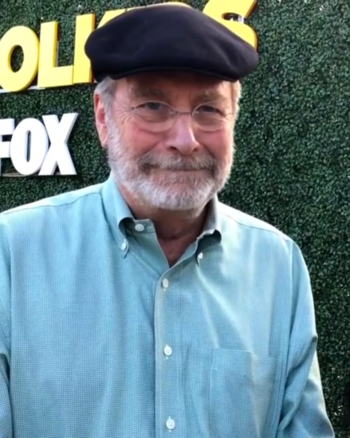 While he's best known as an actor, it took him a while to fully launch that part of career. He studied fine art at the Rhode Island School of Design, earning a master's degree, then turned around and devoted most of The '70s to being a comedic Singer-Songwriter, recording seven studio albums and performing as an opening act for the likes of Frank Zappa, Randy Newman, Bruce Springsteen and Billy Joel. "Miami", a satirical Bossa Nova number, is probably his most famous song. Strong evidence points to Mull having originated the famous maxim "Writing about music is like dancing about architecture."

Starting with Mary Hartman, Mary Hartman, he became a fixture in TV and movies, including playing Colonel Mustard in Clue, plus roles on Roseanne, Sabrina the Teenage Witch, Danny Phantom, Arrested Development and Two and a Half Men. He was also a regular celebrity during the Tom Bergeron run of The Hollywood Squares and was the center square for its final season.

Tropes associated with Martin Mull's comedy and music include: