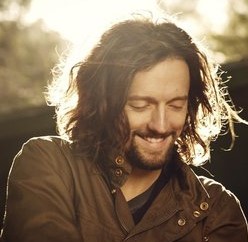 Some guy in a hat without his hat.
Open up your mind and see like me
Open up your plans and, damn, you're free
Look into your heart and you'll find
Love, love love love...
— Jason Mraz, I'm Yours

Jason Thomas Mraz (born June 23, 1977) is an American singer/songwriter who hailed originally from Mechanicsville, Virginia. After a brief stint in his youth at the American Musical and Dramatic Academy, he wound his way to San Diego, California, where he played the coffee houses and focused on his songwriting. Influenced somewhat by the music of his youth (Stevie Wonder, New Kids on the Block, Michael Jackson, Aretha Franklin), Mraz's style is a blend of folk, pop, rock, reggae and hip-hop. He currently is a raw foodist (with occasional lapses) who owns an avocado farm in California. He also likes cats.

Tropes for the artist include: