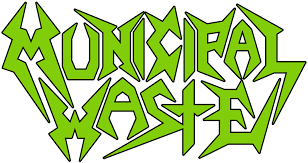 Wasting 'em all since 2001.
Advertisement:

Municipal Waste are a crossover Thrash Metal band formed in Virginia in 2000, influenced by other crossover bands like Suicidal Tendencies and Dirty Rotten Imbeciles.

Their first show was at a Richmond New Year's Eve Keg party in 2000/2001. The band was blamed for inciting a small riot. Following the release of Waste 'Em All, both Andy Harris and Brandon Trache left the band, being replaced by drummer Dave Witte and bassist "LandPhil", both of whom, had since then stuck with the band for almost a decade. Afterwards, they signed onto Earache for Hazardous Mutation.

After a tour with Destruction, they began to work on The Art of Partying, following another tour with The Haunted and spots at Wacken Open Air in Germany and Reading and Leeds Festivals. They also went on the road with Suicidal Tendencies. Coincidentally, they began to hit acclaim with their 2007 effort.