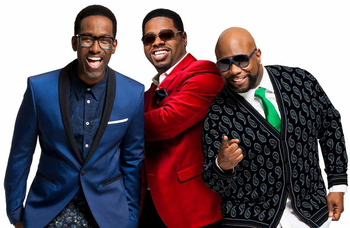 A'ight, check this out: one day back in Philly, four guys wanted to sing...
They came up to me, I said "What's your name?" "Boyz II Men!" Yeah, you know what I'm saying
Then I said, "All right, fellas, well let me see what you can do", and then the smart one named Wan, he said
"Yo Mike, check this out, see if this one moves you!
—The bridge to Motownphilly, as rapped by Michael Bivins

Boyz II Men is an R&B vocal group who are well known for both their emotional ballads and their A Cappella harmonies. They also proved to be one of the most successful music acts in the '90s and helped re-popularize R&B for mainstream audiences when it saw a decline in the '80s. Their names come from the song Boys to Men by New Edition, a group that helped inspire their sound. Unlike the usual arrangement of having 1 or 2 lead singers with the other members doing backup vocals, the members of this group have all provided lead vocals on a regular basis.

Band members Nathan Morris and Marc Nelson formed the group, then known as Unique Attraction, in 1985 while they were in high school. Wanya Morris, Shawn Stockman and Michael McCary, who also attended the same high school as Morris and Nelson, also joined as permanent members. Nelson left the group after personal conflicts while the rest remained as a quartet.

They saw success with their first album Cooleyhighharmony (1991), which had a New Jack Swing style to it, which provided the group 4 top 10 singles (including a number 1 for "End of the Road" which was placed on a reissue of the album and remains the best selling single by Motown) and would go on to be certified 9x Platinum by the RIAA as well as give them their first Grammy win. Their sophomore album II was an even bigger success, selling 12 million copies in the US alone and earned the group 2 more Grammys. Their third album, Evolution, was not as big, selling about 3 million copies though it did give the group another number 1 hit single.

Chronic back problems forced McCary to leave the group in 2003. While they in general have not been as successful in 2000s nor have they received as much marketing support as they did in their peak years, they are still actively recording albums, going on tours and making a number of media appearances over the years, typically as a nostalgia act. These have included an episode of How I Met Your Mother, Grease: Live, Dancing with the Stars, and Long Shot.