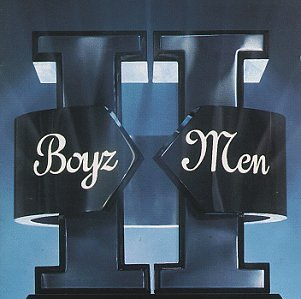 Oh God, give me a reason
I'm down on bended knee
Close your eyes, make a wish
And blow out the candlelight
For tonight is just your night
We're gonna celebrate, all through the night

Pour the wine, light the fire
Girl your wish is my command
I submit to your demands
I will do anything, girl you need only ask
— "I'll Make Love to You"
Advertisement:

II is the third studio album recorded by American R&B group Boyz II Men. It was released through Motown Records on August 30, 1994.

As big as Cooleyhighharmony proved, the group were ready to fully embark in the Hip Hop Soul sound. Also, while they wanted Tim Kelley and Bob Robinson to take the lead on producing the album, Motown didn't want to put it in the hands of some relative newcomers. So they split the duties with Flyte Time (Jimmy Jam and Terry Lewis), L.A. Reid, and Babyface.

While under normal circumstances, that could be the recipe for a trainwreck, it actually proved to be quite fruitful. The resulting album became one of the hallmark moments in R&B. II debuted at #1 on the Billboard 200 album chart, selling 350,000 copies in its first week. Ultimately certified Diamond by the RIAA behind 12 million copies sold in the United States, it would finish #22 on the year-end chart for 1994, #3 on the year-end chart for 1995, and #13 on the decade-end Billboard 200 album chart for The '90s.

The album was supported by five singles: "I'll Make Love to You", "On Bended Knee", "Thank You", "Water Runs Dry", and "Vibin'". "I'll Make Love to You" would spend a mind-numbing 14 consecutive weeks at #1 on the Billboard Hot 100.note While it spent more time at #1 on the Billboard Hot 100 than any other single in 1994, its raw sales were beaten by "The Sign" from Ace of Base, which became the #1 song of 1994. When "On Bended Knee" supplanted it at #1 in December 1994, Boyz II Men joined Elvis Presley and The Beatles in accomplishing the feat of replacing themselves at the top of that chart.

"Cause saying how we trope is no longer allowed"