Music / Live at the Apollo 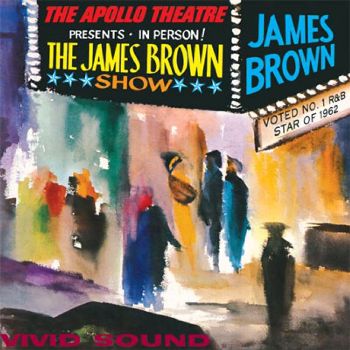 I feel so good I wanna SCREAAAAAAAM!
Our whole thing was based on James Brown. We listened to "Live At the Apollo" endlessly on acid. We would listen to that in the van in the early days of 8-tracks on the way to the gigs to get us up for the gig. If you played in a band in Detroit in the days before The MC5, everybody did "Please, Please, Please" and "I Go Crazy." These were standards. We modeled The MC5's performance on those records. Everything we did was on a gut level about sweat and energy. It was anti-refinement. That's what we were consciously going for.
—Wayne Kramer, guitarist with MC5.
Advertisement:

Live at the Apollo is the title of a 1963 Live Album by James Brown. The record had no new material, just hits from his previous studio albums. As this was still early in Brown's exceptionally long hit packed career it's by no means his definitive album, but is certainly seen as his best Live Album. This classic was a commercial bestseller from the start and spent 66 weeks on the Billboard Top Pop Albums chart. It's widely acknowledged as one of the best live albums ever, often ending on the first spot of such lists. In 2004 it was included in the National Recording Registry for being "historically, culturally and aethestically significant." Time included it in their 2006 list of 100 essential and timeless albums. It was also listed at #25 in Rolling Stone's 500 Greatest Albums Of All Time.

Tracklist note  The original 1962 issue has no index. Tracklisting was only added later.