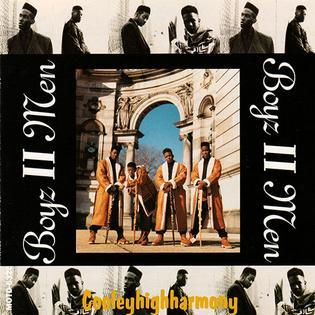 When I can't sleep at night without holding you tight
Girl, each time I try I just break down and cry
Pain in my head oh I'd rather be dead
Spinning around and around
—"End of the Road"
Advertisement:

Cooleyhighharmony is the debut album recorded by American R&B group Boyz II Men. It was released through Motown Records on April 30, 1991.

Most of the songs on the album were written by group members Shawn Stockman, and Nathan and Wanya Morris. Some input was also provided by Michael Bivins of Bell Biv DeVoe. The burgeoning Philadelphia group was advertised to be part of the New Jack Swing movement. But while debut song "Motownphilly" indeed followed that sound, there were plenty of songs that would point toward a different direction for the future superstars: Hip Hop Soul. That sound would be reflected by several of their later songs from this album, including "Uhh Ahh" and "It's So Hard to Say Goodbye to Yesterday".

The album proved to be an incredible hit, going nine-times Platinum in the United States. It peaked at #3 on the Billboard 200 album chart, and finished in the top quarter of the decade-end Billboard 200 album chart for The '90s. Six singles were initially released to support the album: "Motownphilly", "It's So Hard to Say Goodbye to Yesterday", "Uhh Ahh", "Sympin", "Please Don't Go", "End of the Road", and "In the Still of the Nite (I'll Remember)". Three of those singles reached the top three of the Billboard Hot 100.

The album was re-released in 1993 with all the original songs, two radio edits, and the songs "End of the Road", and "In the Still of the Nite (I'll Remember)". The former song would become the group's first #1 on the Billboard Hot 100. It also hit #1 in the United Kingdom, being awarded a Platinum single from the RIAA and a Gold single from the BPI. In fact, it would become one the biggest songs of all time: It was #6 on the decade-end Billboard Hot 100, and was placed at #55 on an all-time Hot 100 list assembled by Billboard in 2018.

Several of the album's singles were also featured on film soundtracks: "Sympin'" was remixed and released as a single in 1992 to promote the soundtrack for White Men Can't Jump, while "It's So Hard to Say Goodbye to Yesterday" was included in the soundtrack for Lethal Weapon 3. "End of the Road" and "In the Still of the Nite (I'll Remember)" were originally recorded in 1992 for Boomerang (1992) and The Jacksons: An American Dream, respectively, before being transplanted onto Cooleyhighharmony's 1993 reissue after becoming massive hit singles.

The album was remastered in 2009; this time, with a second disc of 12-inch remixes, and two unreleased tracks.

"I thought we'd get to see forever, but forever's troped away"