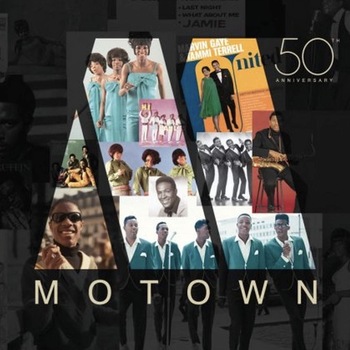 An image celebrating the label's golden anniversary in 2009.
"Once upon a time in a kingdom known as Detroit, there lived a young warrior named Berry … [who] took on the ways of the minstrel, and he began to write songs for others to sing. And a local celebrity, Sir Jackie of Wilson, heard some of the songs and put them on circular platters called “discs.” And the townspeople liked the sounds that emanated from the pressed discs, and turned them into something called “hits.” … So Berry went out on a great quest, and he found Miracles and Wonders and Marvelettes. And he brought the discoveries to a secret place called Hitsville, and there he taught them wondrous things. There was young Smokey of Robinson, and Mary of Welles, and Martha of the Vandellas. Marvin of the Gaye and Tammi of Terrell. And there were Pips and Knights named Gladys. And Temptations and Tops, Contours and Spinners. And before anyone realized what was happening, it happened: Hitsville became like its name."
— Richard Pryor, Motown 25 Special

After a successful stint writing for Jackie Wilson, Detroit-based songwriter Berry Gordy decided that there was more money to be made in the music business as a producer than as a songwriter. Taking out a loan, he founded the Tamla Records label and started signing local talent. Following up early successes with the creation of the Hitsville USA studio, Gordy started a second label to supplement Tamla. Its name was a portmanteau of the Detroit nickname, "Motor City" or "Motown". From there, Tamla Motown (along with such associated labels as Gordy, Soul, and V.I.P.) went out to conquer the world of pop.

This American record company had a huge impact on popular music in general and Soul in particular, so much so that it was revived in 2011 after being closed for six years; it's noted for a number of reasons. First and foremost is the "Motown sound", which was developed primarily by company session group the Funk Brothers; this was characterized by tambourine-accented percussion, melodic bass lines, gospel-influenced call and response singing and lush string arrangements. The Motown sound was highly influential on subsequent artists, especially those of The British Invasion.

Second, Motown labels were noted for their factory-like production process. Berry Gordy was very keen to see black musicians getting into the upper reaches of the pop charts, so songs were tailored with crossover appeal in mind. Much of the production work was centered around staff songwriters and songwriting teams, the most famous of which was Holland-Dozier-Holland. New tunes were written during the week and then presented at Gordy's quality-control meetings on Fridays, where they were played in a sequence of the top five singles of that week. If Gordy felt that the song lacked promise, he wielded an executive veto. It could be overcome only by artists with enough clout and determination, mostly famously when Marvin Gaye butted heads with Gordy over the socially-conscious song "What's Going On", which proved a critically hailed smash hit when Gaye got his way and had it published.

Finally, Motown was famous for the sheer number of hugely successful acts they signed. At one time or another, Marvin Gaye, Stevie Wonder, Michael Jackson, Lionel Richie, Boyz II Men and Rick James were artists signed to one of Gordy's Motown labels, while famous acts from the glory days of the label like The Temptations, the Four Tops, The Supremes, Smokey Robinson and the Miracles, and Martha Reeves and the Vandellas quickly became household names.

The early years of the label, and the career of The Supremes in particular, were the inspiration for the musical and movie Dreamgirls. The long-overlooked contribution of The Funk Brothers is illustrated in the documentary/concert film, Standing In The Shadows Of Motown.