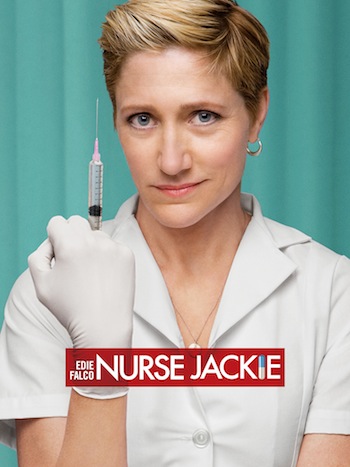 Nurse Jackie, to which some fans fondly refer as "Nurse House", is a Showtime half-hour drama/comedy about Jackie Peyton (Edie Falco), a nurse in an inner-city hospital in New York City who manages to be both a mega-bitch (with a heart!) and a life-saving Jesus in a skirt. Or scrubs, whatever.
Advertisement:

It attracted some overstated initial hype in the USA about how dark and edgy it was, although that is true only by comparison to more sentimental hospital dramas. The strengths of the show are the way it combines (often dark) humour with subtle drama, its rounded characters and how it avoids being preachy. Jackie is bitchy, cheats on her husband and is addicted to all sorts of medication, but is still a sympathetic character.

Some other characters include Jackie's Gentleman Snarker English friend Dr. O'Hara; Gloria Akalitus, Jackie's mostly no-nonsense boss; Dr. "Coop" Cooper, a parody of the traditional supercool heroic young doctor who always seeks attention; Jackie's Naïve Newcomer protégée, Zoe; Eddie, the hospital pharmacist who was once her Hopeless Suitor drug supplier and friend but is currently playing a more neutral role in her life, and Sam, a nurse who was once a drug addict but doesn't know about Jackie's true nature.