Married to the Job 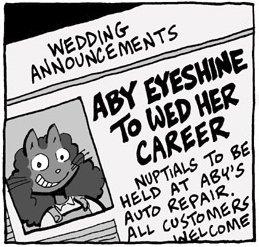 When a character's devotion to their career is such that it begins to seriously affect their ability to hold any kind of relationship outside of it. Perhaps they're spending too many hours at the office and not enough with the wife and kids, perhaps they've scheduled a business meeting at the same time as little Sally's birthday party or Tommy's athletics day, or perhaps their work is leading them into some very dark or dangerous situations. Either way, their spouse or partner isn't very happy with them and is quick to let them know it.

The Character is a Workaholic. In some cases, this concern is justified — the character genuinely is spending too much time at work and is neglecting their other relationships and commitments, and the complaining spouse is genuinely in the right to call them out on it. This is particularly the case if the character has a career that, whilst it may be important, is not going to result in any fatalities or the Collapse of Western Civilization if they take a break now and then. In these cases, the character might be neglecting their significant others and relationships out of a genuine desire to provide the best for their families, having completely missed the point that it'd probably be better for their families in the long run if they actually spend some time with them now and again. On the other hand, they might just be too obsessed with their career and the perks, privileges, and powers they have and have forgotten what's important in life. Or because they're simply a workaholic. If it's a happy story, then the character will gradually realize that they're focusing on the wrong things and resolve to make amends and spend more time with their loved ones. In a Downer Ending, the character will typically put in an insane amount of effort for a big promotion/raise/transfer/etc. at work, then actually get it, but lose everyone who was important to them in the process and quickly discover that whatever they wanted wasn't all it was cracked up to be.

The Character Performs a Job That is Just That Important. More often than not, the complaining spouse's position is a little less clear-cut and righteous. While they might have a good point about their loved one's spending too much time at work having a negative impact on their marriage/relationship, the fact is that their loved one does a job that is demanding and their partner really does need to put in all that time at work in order to effectively do their job. This is Truth in Television, especially if the job is a profession that involves saving human lives, like a police officer, firefighter, paramedic, doctor, heart surgeon, and more, or maintaining important infrastructure like in IT or transportations, in which case people really do need to work long hours, be on call 24-7, and/or expose themselves to dangerous situations, and lives genuinely can be lost if they aren't attentive to their work to a high degree, even if this means they have to neglect their relationships or families. In these situations (whether the writer intended it or not), the complaining spouse may come across as selfish, whiny, and unfairly demanding, especially if it should have been obvious from the start of the relationship that their loved one's job was going to demand a large portion of their time.

A Truth in Television, as a common complaint these days is that the pursuit of success in climbing the career ladder is causing more people to work longer hours with less time to spend with their loved ones.

This is particularly common among military personnel, police detectives, secret agents, and doctors. Architects also seem prone to this trope (and usually fall into the first category) for some reason.

An interesting aspect whenever this is brought up in fiction is that nobody ever seems to direct the blame to the one thing largely responsible for this plight: mismanagement. If a character is spending too much time at their job, it usually means a misallocation of resources or manpower on a managerial level. Yet nobody ever approaches the supervisors and managers, even though they are the ones who might actually be able to do something for the character suffering from this.

See also Salaryman, The Masquerade Will Kill Your Dating Life, Workaholic, The Chains of Commanding, Career Versus Man, Family Versus Career, When You Coming Home, Dad?, and Eternal Employee. Contrast the Crusading Widower, who loses his family through more violent means. Such a character may sing a Job Song.