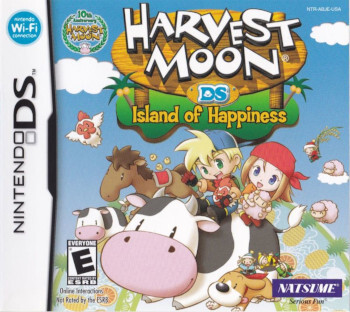 Harvest Moon: Island of Happiness was the fourth Harvest Moon (now known as the Story of Seasons) released on the Nintendo DS in 2007. It was also released alongside Harvest Moon: Tree of Tranquility for the series's tenth anniversary. The game's mechanics include using Wifi to connect to other players and talk to them, use a ranking service, and moving by using the touch screen. You can also marry the other protagonist, something not seen for a while since Harvest Moon 3.

You play as either Chelsea or Mark as a traveler on board a boat to start a new life on a farm, but your boat hit by a horrible storm. You and several other passengers had found themselves stranded on an island, which also had an abandoned village. So it's up to you and everyone to help make this island prosper.

In 2009, the game was given a retool titled Harvest Moon: Sunshine Islands.

Island of Happiness provides examples of: