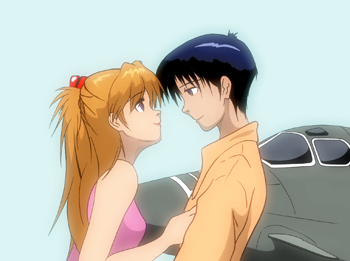 Now with adult pilots, war planes replacing Super Robots, set in America and with a new brand of angst!

- or Eva 303 - imagines an alternate universe where the characters of Neon Genesis Evangelion are defending our modern world in a post-September 11th age.

Seele, a secret organization that has been manipulating world politics over the centuries, has been trying to undermine America's influence throughout the world, supporting anti-American terrorist groups to target what they believed to be an unrestrained imperial war machine and an overbearing international police organization. After its latest failure, they supplied the North Korean regime with nuclear weapons, funds and military equipment and put in motion Third Impact, Seele's ultimate plan to deal with the USA once and for all.

However, Seele ex-member Gendo Ikari left the organization after his wife's death and fled to the United States with his son, determined to stop Seele. Gendo made contact with the American government and secured funding for his organization, Nerv, and the Evangelion Project, a project aimed to defeat Seele and prevent Third Impact.

The story begins when twenty-year-old Shinji Ikari, appointed Third Child, reports to Distler Air Force Base (home of Black Project Evangelion) for Eva training. He befriends several of his pilot partners, particularly Kaworu Nagisa, but the resident top pilot, a twenty-year-old woman called Asuka Langley Sohryu is NOT happy with his arrival, and as soon as he lands, she challenges him to a dog fight...

Evangelion 303 is a Neon Genesis Evangelion Doujin that is essentially the love child of Evangelion and Top Gun (or Area 88). It takes the characters, elements, and themes while changing the setting, replaces the Super Robot Genre features with Military and Warfare fiction tropes and injects a dose of realism. In the Sliding Scale of Idealism Versus Cynicism, this doujin sits firmly on the centre, featuring troubled characters that struggle to overcome their inner conflicts. It tends to be a grounded speculative science fiction: the technology used in the Evas is nonexistent but feasible.

It also has nudity, mature themes and it is NSFW (keep in mind that all pilots in this story are adults).

(Note: His "Evangelion" Gallery only has a fraction of his Evangelion fanart).

Compare with RE-TAKE — the most famous Eva doujinshi — and Aki-chan's Life.

open/close all folders
A-C
D-F
G-I
J-L
M-O
P-R
S-U
V-Z
You know, this is a pretty critical time for you. You need a wingman if you are gonna get your life together in time.