This is a page about the characters appearing in the Fan Webcomic Evangelion 303. Just as a warning, this page probably contains spoilers. All images are owned by Grummancat 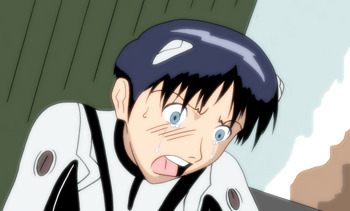 Third Child and pilot of Unit 01.

Born in Japan, he has lived in America most of his life. Following his mother's death his father fled to the Unites States with him. Shortly after Gendo sent him away in order to protect him -presumably from Seele-. He lived for a short time with Dr. Akagi and when he was old enough he was sent away for school. In some point he became a soldier and before the beginning of the story he served in the Black Aces.

Shortly after reporting to Distler Air Force Base he began a rocky relationship with the resident Ace Pilot, Asuka Langley Sohryu. 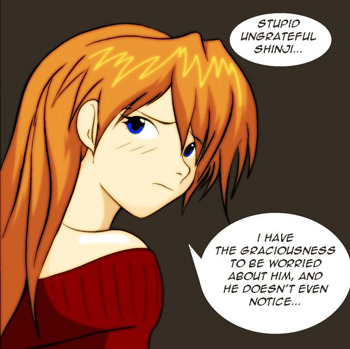 I'll confess one thing; I've never been very good at getting used to new people.

Second Child and pilot of Unit 02.

She is an intelligent, skilful, spirited, emotional, hot-tempered, prideful woman who is always looking for rivals to test her skill and boasts about being the best that there ever is. However her pride is in reality a mask to hide deep-seated insecurities and self-esteem issues. When the story begins, her performance has been slipping together with her self-confidence.

Shortly after Shinji's arrival to the Base she began a complicated relationship with him. 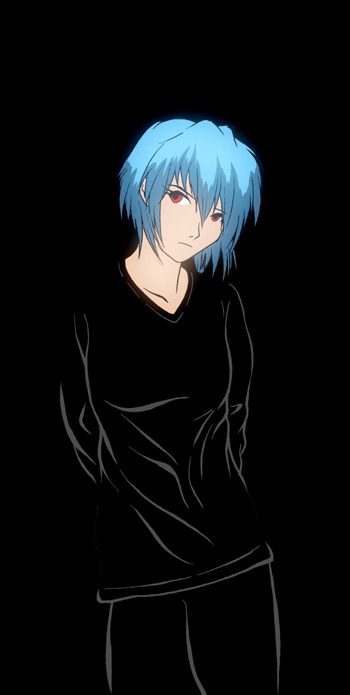 What is he expecting from me... That I am able to provide...?

First Child and pilot of Unit 00.

She used to be the most cheerful member of the squad. She was exuberantly giddy and enthusiastic but an accident rendered her eerily quiet and unemotional. Her closest friend in the Base is Kaworu Nagisa, the only one who never left her side while she was in a coma.

After her change she developed a very close -but troubled- relationship with Kaworu. She is in love with him but she is uncertain about his feelings or what kind of relationship he wants. After an argument with Saburo she fed up with that situation and demanded that Kaworu made up his mind about them. 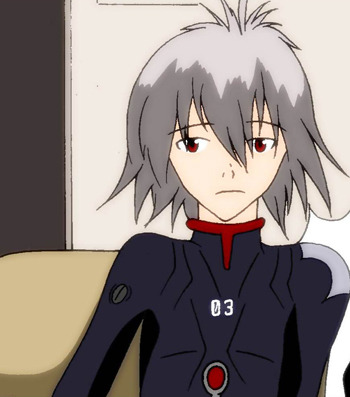 Don't try to understand it. Humans are naive by design. Our Father thinks in ways alien to us. Our job as human beings is to pass the tests. To make ourselves worthy of His presence.

Fourth Child and pilot of Unit 03.

Gradually he and Rei got closer and he fells in love with her. However, his inability to make the matter clear increases Saburo's jealousy and Rei's wariness, which in turn heightens the strife among them, to his regret. 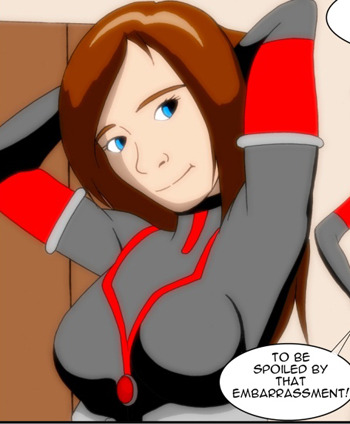 Jessika (after Asuka has spent a long while complaining about "idiot Shinji"): Hey Asuka... What's the German word for boyfriend?
Asuka: Depends... Could be "fester freund"... or simply "freund" if you were introducing him.
Jessika: Hmmm... I thought maybe "idiot" was the German word for it...

At the beginning she was chosen as a possible replacement for Asuka, but both girls worked together in the B1c program. She had a huge crush on Asuka that she kept secret. 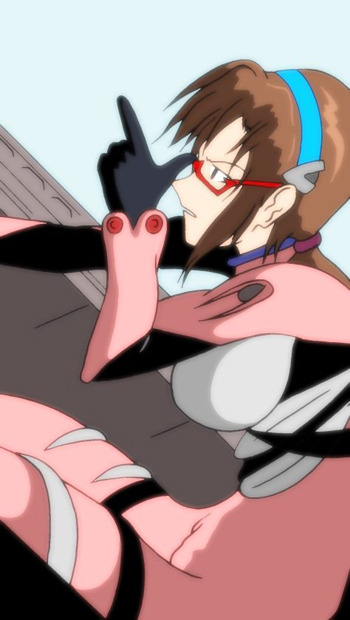 I find you... Exciting. Like a really challenging summit. The more energy I use to best someone... The more distracting they become.

Sixth Child and pilot of Unit 05.

Mari is the last pilot to join to the team. She is exuberant, flirty, battle-hungry and not entirely sane. She loves to find rivals to beat and listen to Elvis Presley.

Upon meeting Asuka she starts fighting her to earn the "top pilot in the program" place, but Asuka proves to be an interesting challenge, which reinforces Mari's desire to beat her.

Hikari Horaki
I feel like I'm on a sinking ship... [...] Like I'm watching helplessly while my pilot self-destructs...

Asuka's weapons officer and one of her best friends. She often tries to restrain her friend's belligerent and hot-tempered nature. Unfortunately she seldom succeeds. Toji Suzuhara and she got engaged during the story.

Kensuke Aida
For getting beat up by women this much, shouldn’t you be sleeping with at least one of them?
Shinji's weapons officer and nerdy friend. In this setting he has achieved the dream of his counterpart of the original universe of being a soldier.
Saburo Hiryu 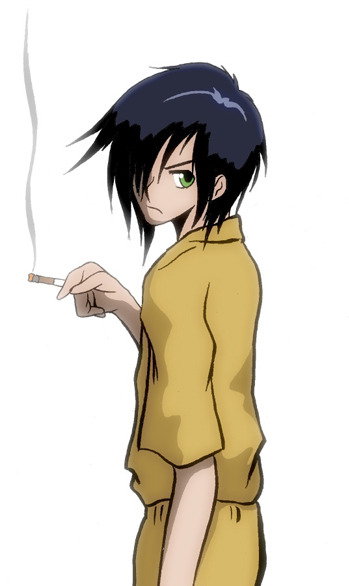 What's the most you've ever had to pay for making a mistake?

When Saburo felt ignored by Kaworu, he broke off in a fit of jealousy. He regretted it afterwards and he has been unsuccessfully to get Kaworu back since. 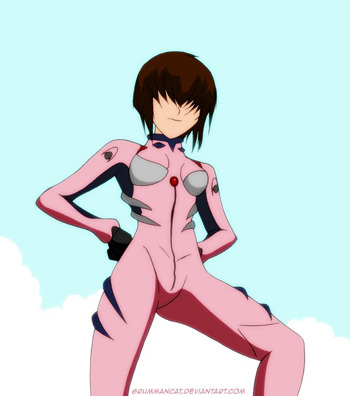 DVI Scanners on. Set to maximum res. If there's a hawk circling down there, we'll see it.
Mari's weapon officer.
Captain Misato Katsuragi
You want to be treated like an adult, you act like an adult! You find it within yourself to focus on your job like everyone else!
Captain and commanding officer of the Evangelion squadron. She greatly cares for all of her soldiers, even if they often drive her crazy with their antics, and she tries to help them when they are going through a hard patch. Nonetheless, she’s not afraid of chewing them out if they mess up.

Gendo Ikari
There are 24 hours in a day… That’s plenty of time for you to do your duties… and still be here.
Former Seele's member, director of Nerv and Shinji Ikari's father. Shortly after his wife's death he left Seele and devoted himself to destroy that organization, securing funding for his organization, Nerv, and the Evangelion Project.
Ritsuko Akagi
Misato: There are times when I really hate this job...
Ritsuko: The better question is: Are there any times when you don't hate your job?
Nerv's second in command. After Yui's Ikari death she became Gendo's lover and works with him closely. She also raised Shinji for a short while. She is responsible, among other things, for crew assignments.
Other characters

Try talking to her… […] Yes. She can hear you— Even in her sleep. Most likely she knows you are here. […] It doesn’t matter. Talk about the news… Your day… Just let her hear your voice. What’s important is that you are giving her some direction to go in… She’s following your voice. You more than anyone can help her with this. That’s the best thing anyone can do.
Distler’s Air Base senior physician.

”We were put here to do the bidding of those who elected us! Why are you guys so obsessed with spending money we don’t have?”
Member of the Committee tasked with overseeing the Evangelion Black Project. He loathes the Project, does not trust Gendo Ikari at all and he is very vocal about it.

Secret society that has been manipulating world politics for centuries, consistently supporting the political or military underdog. During the American Revolution they helped the colonies to fight the powerful British Empire. During XX century, though, and especially after the end of Cold War they have been trying to put an end to the position of USA like global super-power.