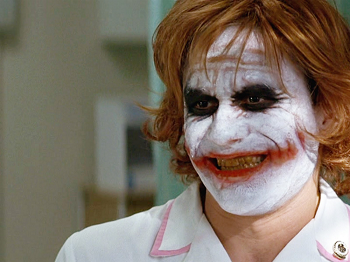 "Hi..."
"How many times have I told that boy not to accept food from mortal enemies out for revenge, disguised as girls?"
— Shoubu's mother, Duel Masters
Advertisement:

A Crossdressing character whose choice of attire is played for weirdness, for creepiness, for Squick, simply for shock value, or to show that he (and it's virtually always "he") is evil or deranged. While the look of the Wholesome Crossdresser tends to gloss over the dissonance between genders, this trope often calls attention to it. Often, this crossdresser exaggerates Tertiary Sexual Characteristics without bothering to cover up secondary (or primary) ones. Makeup Is Evil is often involved. Frequently, the unfortunate implication is that crossdressing is, in itself, creepy, but it may simply be one aspect of a character who's generally creepy.

Japanese works tend to play up a few common traits for this character type: a combination of a gaudy outfit, a Noblewoman's Laugh, and absolute narcissism. He also often has a crush on the Big Bad, The Dragon, or in more humorous works, the Chaste Hero.

Sometimes coincides with both Trans Equals Gay and Depraved Homosexual, for a lethal combination of stereotypes. May overlap with Disguised in Drag (or, very rarely, its Distaff Counterpart, Sweet Polly Oliver) if the character adopts a crossdressing disguise more often than seems strictly necessary and/or enjoys it. Also may overlap with Fan Disservice. For the opposite, see Wholesome Crossdresser. See also Sissy Villain.