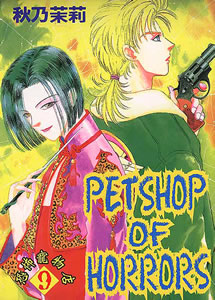 "Welcome to my pet shop. Tonight, you will find something you desire."
—Count D
Advertisement:

Pet Shop of Horrors is a Horror/Fantasy josei manga by Matsuri Akino, which first ran in Missy Comics DX from 1995 to 1998. Despite the title, the manga only rarely focuses on horror, instead slowly building up the relationships between its characters in a magical setting. The four-episode anime adaptation produced by Madhouse chose to focus largely on the horror, and re-imagined four chapters from the manga series.

Pet Shop of Horrors is the story of a peculiar shop in the Los Angeles Chinatown, and the clients that visit it. The store's proprietor is an effeminate and sinister man only known as "Count D". He sells both normal animals and mythical creatures to people who visit his Dysfunction Junction. These animals and creatures can appear human to clients who are searching for something in life — a pet to help them get over the loss of a child, for example, or to cope with unrequited love. Count D uses his pets to teach their human caretakers a lesson, making them sign a contract stating they'll take good care of their new friends. Almost inevitably, they don't. The outcome is rarely pleasant, although some stories (especially those involving pets given to children) do have very heartwarming endings.

Enter Leon Orcot, a young and inexperienced LAPD detective, who has noticed the correlation between some very messy deaths and the victims' visit to the titular pet shop. Leon takes to spending more and more time at the shop as the series progresses, developing a peculiar yet close relationship with the guy he's supposed to be investigating for murder.

When Leon's traumatized and mute little brother Chris arrives to stay with his sibling, D becomes the boy's babysitter. Along with the animals of the pet shop, Leon and D become the boy's new family, and they gradually open up to each other. The cast additionally consists of Jill (Leon's detective partner), Tetsu (a teenaged Tao Tieh goat-demon with a crush on D), Pon-chan (a little tanuki girl), Hon Long (a three-headed dragon girl) and Q-chan (D's bat familiar). However, D's affection for Leon and Chris doesn't stop the pet shop's body count from increasing — and when D's Evilutionary Biologist father turns up after many years, Leon finds himself drawn into a desperate attempt to save all of humanity.

Tokyopop's translation of the first few volumes added swears, mistranslated many names and sound effects, included many typographical errors, and generally altered the source material. After four volumes, a new translator was hired, who immediately asked the manga's fan translation community on Yahoo Groups for help. As a result, the remaining six volumes of the series have a more accurate translation, although they, too, are riddled with flaws and egregious mistranslations. Much of the manga's text is also full of untranslatable jokes: D's speech in Japanese often states one thing in hiragana (ex. "innocent bystanders"), but something quite different in kanji (ex. "mere mortals"). Finding an annotated fan translation is still highly recommended to fully enjoy the series.

The manga has a sequel, Shin Pet Shop of Horrors (New PSOH, or PSOH:Tokyo, in English), with the action moved over to Shinjuku's Red Light District in Tokyo.

Has no relation with Little Shop of Horrors, so no, you won't find giant man-eating plant monsters here.