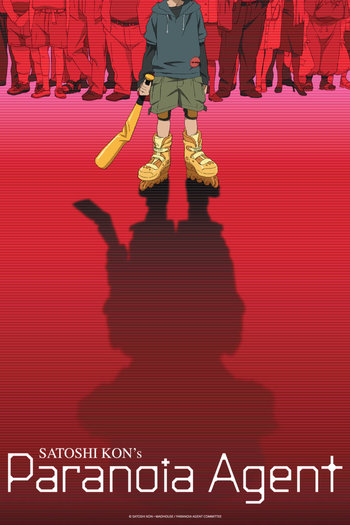 "He comes for those who are desperate."
Advertisement:

A grinning boy in a baseball cap travels around Tokyo on golden rollerblades. He has a bent, golden baseball bat, and he uses it to whack people in the head.

The police are searching for the boy codenamed "Shonen Bat" ("Lil' Slugger" in the English dub), but none of the victims are cooperating fully with the police; in fact, many seem relieved and thankful for the mild concussion the boy gives them via his golden bat. All of the victims have something to hide — but then again, so do the police ...and so does the frail old man who draws chalk equations in the hospital parking lot... and so does everybody who spreads rumors about Lil' Slugger. Who is this mysterious boy, who seems to attack people only when they are about to have an existential breakdown and has never been seen by anyone but his victims? Is he a gang member, a creature of the paranormal, or something else entirely?

Paranoia Agent is a thirteen-episode anime series directed by the late Satoshi Kon, who specialized in mind-bending anime with some social commentary thrown into the mix. At times, the series resembles an anthology, with each episode throwing its star character through a Twist Ending, but everything later becomes connected in a way that rivals Serial Experiments Lain's levels of conspiracy and surrealism. Besides being perfectly creepy, this series is noteworthy for the (Studio Madhouse) animation alone: the characters all have distinct designs, and apart from some minor filler and Stock Footage, cost-cutting tricks were kept to a minimum.

The anime was originally licensed by Geneon, who released it on DVD in North America. After Geneon folded, the series went out of print for well over a decade until Funimation finally acquired the license in February 2020. The English dub aired on Adult Swim in 2005, and re-aired on Toonami in 2020.

Due to the surreal nature of the series, there are numerous spoilers. In order to get the full experience, please watch the series first.

"He tropes for those who are desperate":