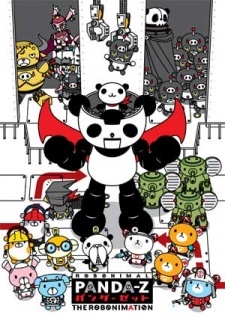 Let's try again. Panda Z is the story of Pan Talon, the robotic panda pilot of the Super Robot Panda Zet, who defends Animal City against Skull Panda and his army of evil Warunimals. Among his robot friends and allies are bunny nurse Rabinna, dog/public telephone Denwan, lightbulb monkey Etekkii, the loyal repairmen Hamgears, and a large team of Firebears and Rescuebears, public servants who are vaguely, well, teddy bear-like. Finally, there's the senile, alcoholic and mildly Ecchi grandfather, Panjii.

The show's tongue is buried so far in its cheek that spelunkers have been searching for its tip for years. The show takes extra care to poke the most affectionate kind of fun at everything Mazinger Z held dear, starting with the Rocket Punch, the enemy beast robots, and a great many of the hero and villain archetypes. Mixed in with these are episodes that are about roughly nothing - Pan Talon struggles to eat batteries (with helpful warnings for children) and searches for a ghost; Rabinna gets lost in lightning storms, failing to get rescued because, y'know, robots short out in rain. One villain is constantly captured and tortured by the promise of snacks; another battles the main characters with Old Maid.

Recommended to check out if you want a couple hours of incredibly light fun.