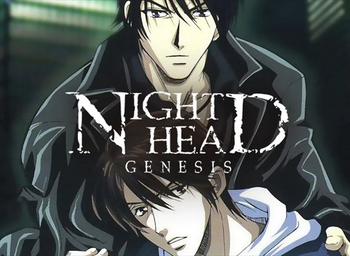 Most humans don't have access to 70% of their brain's mental power. However, some people do, and those people are called psychics.
Advertisement:

The anime begins with two brothers, Naoto and Naoya Kirihara, who were born with psychic powers. They couldn't fit in with normal people because they couldn't control their powers well, especially when they overwhelmed by their abilities due to being so young. Their parents couldn't take the stress of caring for such abnormal children anymore, so they drugged the boys and handed them over to a mysterious laboratory to be cared for and watched over.

After causing a scene at the facility out of anger, Naoto recalls his mother's words and realizes that he and his younger brother only have each other, so he vows to stay by Naoya's side and be his protector forever. Fast forward 15 years later: when the director of the laboratory dies, the invisible barrier surrounding the building disappears, so now Naoto and Naoya are free to escape and experience the "normal' world as adults.

Night Head Genesis was a 24 episode anime that aired in 2006 and was broadcast by Animax among others. In 2008, the series was licensed by Media Blasters and aired on the US network, Toku.

The anime is an adaptation of a 1992 Japanese live-action drama called Night Head. The series also has a 2 volume manga adaptation.