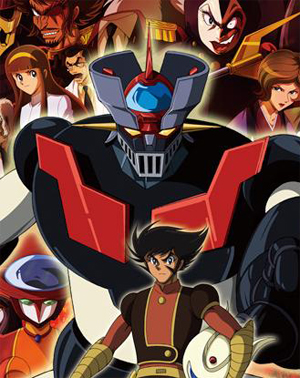 Shin Mazinger Shougeki! Z-hen (True Mazinger Impact! Z Chapter) is an anime based off of Go Nagai's Mazinger series, directed by Yasuhiro Imagawa (Giant Robo, Mobile Fighter G Gundam). While it features many characters and machines from other Go Nagai series, it is not a remake or sequel to the original TV show and manga but a complete reboot for the series intended for viewers new and old alike.
Advertisement:

Set in the near future (or rather, the near future as imagined in The '70s), humanity enters another energy revolution following the discovery of Photon Power. Derived from the Japanium ore discovered under the foothills of Mt. Fuji, its intended use was to solve the world's energy problems with its unimaginable power. Seeking this energy is Dr. Hell, a madman who wishes to twist the energy to his own means, who with his subordinates Baron Ashura, Count Brocken and Viscount Pygman, commands an army of Humongous Mecha excavated from the depths of Ancient Greece to seize the Photon Power Lab for himself.

Meeting the attack head on is the Hot-Blooded teenager Kabuto Kouji, who pilots the Photon Powered Super Robot Mazinger Z, built by his aging grandfather. Joining him is a rather large cast of eccentric characters with their own reasons for being invested in the fight against Dr. Hell. As the fight rages on, the many mysteries and legends surrounding the cast are gradually revealed.

The Shin Mazinger Zero manga was released near the same time, but is not actually related to the plot of the anime.

The anime has been licensed for a U.S. release under the title Mazinger Edition Z: The Impact! by Discotek Media, who previously licensed and released the original Mazinger Z anime among other Go Nagai properties.