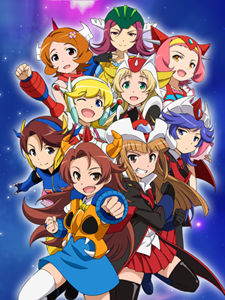 In the Nerima district of Tokyo, a new source of power known as Photon Energy has been developed, promising a future of clean and renewable energy for all. However, all is not well, as the Subterranean Empire led by Doctor Hell has emerged vying to steal the Photon Energy technology for themselves.

Enter Z-chan, Gre-chan and Grenda-san, a trio of young ladies with the ability to transform into super-powered heroines: the Robot Girls. Throwing justice to the wind, they form the Robot Girls Team Z and fight valiantly to crush the forces of evil.

Which is good for us, just so long as they manage to not level the entire city in the process.

The 10-minute episodes center around the Robot Girls' conflicts with Baron Ashura's Mechabeast Girls — moe anthropomorphisms of several of Mazinger Z's classic enemies. What results is a slew of over-the-top action, comedic violence, fanservice and many references to the original Toei cartoons as the Mechabeast Girls try and fail horribly to defeat our horrendously overpowered heroines.

The show was broadcasted from January through March of 2014. On December 23rd of the same year, Toei announced a second season, Robot Girls Z+, which will use the stories from the Great Mazinger/Getter Robo crossover movies and introduce new characters based off of Getter Robo G, Getter Robo Go and the robots from Gaiking: Legend of Daiku Maryu

In August of 2018, a three-episode sequel series was released, Robot Girls NEO, taking place in a Nerima destroyed by a Photonic Energy accident, leading to Getter Rays replacing it. The series features new versions of our three heroines (now Z-chan, Gre-chan and Gren-chan) along with a new Gecchan (Gecchama Eagle).