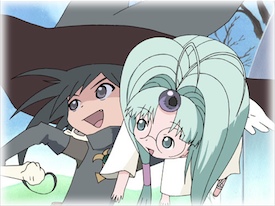 Omishi Magical Theatre: Risky☆Safety is a 1999-2000 anime series based on a manga by Ray Omishi (Sorcerer Hunters, Maze Megaburst Space), which has as its main selling point overpowering cuteness.

Junior-high-schooler Moe Katsuragi is depressed upon seeing her crush with an older girl. The depths of her despair attract a tiny Shinigami named Risky, who will go to great lengths to capture her soul upon death. Risky gets as far as her initial pitch, which causes Moe to laugh... prompting Risky to disappear and the sudden appearance of equally tiny apprentice angel Safety. Turns out that the pair share the body.

Comprised of 24 eight-minute episodes, Risky☆Safety manages to start with Slice of Life comedy and make it even Lighter and Softer than previously thought possible. As Moe goes about her daily life, now accompanied by the bossy Risky and the klutzy Safety, she comes to learn what her happiness really entails.