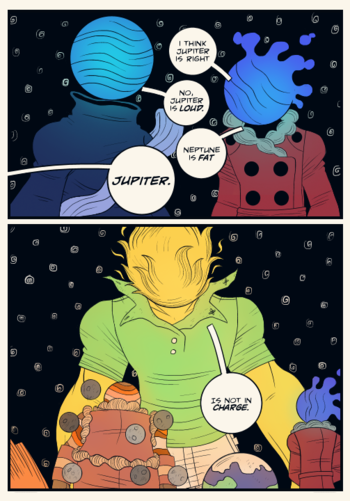 If you're wondering about "what if a group of things are shown as humans, what would they do", look no further than this trope. This is Older Than Dirt, as people since the beginning of time tended to assign personality and (usually humanoid) form to the phenomena of the world, usually because humans understood them better that way: this is the basis for many mythologies. Similarly, works with this trope are made because of the potential human perspective of the things that are personified, or at least the chance to see what they would say or how they would interact with the world.

Usually, the work will treat the personified characters like the things they originally were, only with them being able to talk to each other and act like humans. Sometimes, however, they might lampshade their "humanity" as something alien to them; among other things, they may question why or how they became humans (or why they got sapience or sentience to begin with), or lament about how lame humanity is, or how good being "humans" may be, etc. They may also sometimes get an equivalent of Furry Reminder in that they hang a lampshade over what they originally are.

How they actually become personified is usually not addressed; however, some works may either show them turning into humans, or have them question how they become humans in the first place, if not actively seeking answers for it.

Sub-Trope of Anthropomorphic Personification and Moe Anthropomorphism. Compare Cute Monster Girl, which is when monsters or other inhuman beings resemble attractive human girls, Nations as People, which is about the personifications of countries appearing in a work regardless of whether the cast is mostly personifications or not, Animate Inanimate Object, where inanimate objects are given life but not human form, and World of Funny Animals, where the work takes place in a world where everyone is an animal with some amount of human traits. Those tropes and this one can overlap, though this trope is more about non-human objects and concepts being depicted as humans.